(CNN) -- A Southern California teenager has serious bragging rights: After docking back in his home state late Thursday morning, Zac Sunderland, 17, can claim to be the youngest person to sail around the world alone. 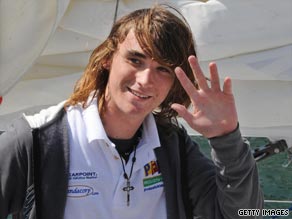 The hardest part of a solo voyage is always being tired, Zac Sunderland says.

Sunderland was greeted with thunderous applause and congratulations as he arrived at Marina del Rey in his 36-foot sailboat.

"It's kind of crazy to have it done now because, I mean, for the past year I've been just fighting for the next ocean, fighting to get back. And now I'm back so it's amazing," he said.

The teen acknowledged the 27,500-mile voyage wasn't easy. He told CNN that pirates off the coast of Indonesia gave him quite a scare.

"[I] had a boat circle in and ended up calling in the coast watch and they chased them off but, yeah, [I] lucked out there! About an hour and a half of hell."

Severe storms also were a problem, he said.

Sunderland's Web site says he bought the boat with his own money.

His parents had hoped he would find something that would spark a fire in him, a passion that would direct him away from all the negative and harmful influences that are so prevalent in society, but even they were stunned by the scope of his dreams and desires, it says.

He was 16 when he left Marina del Rey on June 14, 2008, aboard his boat, Intrepid. Solitude and exhaustion were just a couple of factors that faced him each day.

Zac Sunderland, the youngest person to sail around the world alone, takes your questions and talks to Campbell Brown
Tonight 8pm ET

"The hardest constantly was the tiredness," he said. "I mean, you get over the loneliness, but tiredness, it's an ongoing thing. Half the time I haven't slept in 48 hours and it's just hard to get enough rest."

Sunderland said he made some good contacts along the way.

"It's interesting just thinking back to the different places in the world because I have so many friends in different parts of the world that are like family, you know, and all these different experiences," he said.

"It's an amazing year. It seems like yesterday that I was here but in other ways it seems like a hundred years."

So what's next? "Yeah, I don't know, just go chill with my friends," he said. "Go skate. Go do something normal for a change, you know."