WASHINGTON (CNN) -- The defense secretary will not ban smoking by troops in war zones despite a recommendation to do so by a Pentagon-commissioned study. 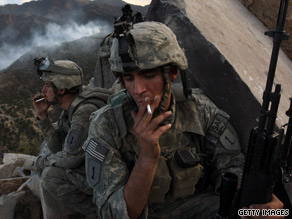 Defense Secretary Robert Gates says he does not want to compound stress in combat zones by banning smoking.

"We are fighting two wars right now, using a force that we are demanding more of than we ever have before. They are under enormous stress and strain, and the secretary does not want to compound that stress by taking away from them one of the few outlets they have to relieve that stress," Pentagon spokesman Geoff Morrell said Wednesday.

A new study commissioned by the Pentagon and the Department of Veterans Affairs recommends a complete ban on tobacco, which would end tobacco sales on military bases and prohibit smoking by anyone in uniform -- including combat troops in the thick of battle.

Morrell said that Gates has not seen the report and will consider the recommendations to move towards a goal of a smoke-free military.

"There may be things we can do to try to move towards that goal. But he has been very clear to me, up front, that one of the things he is not prepared to do is to restrict the use of tobacco products in combat zones," Morrell said.

Anti-smoking activist Richard Daynard said Gates' decision was logical. But he predicted that, as smoking is banned on military bases outside combat zones, "then the problem over time will resolve itself, even in combat zones."

The founder of the Tobacco Products Liability Project likened the situation to that which prevailed during the 1980s, when smoking aboard U.S. commercial airlines was banned.

"There was an exception for the cockpit, at least on some airlines, on the theory that you probably don't want your pilot, if he's hooked on nicotine, to be cold-turkey while he's trying to navigate your plane."

But, he said, the exception has been phased out.

CNN's Adam Levine and Tom Watkins contributed to this story.

All About The Pentagon • Smoking • Robert Gates