(CNN) -- A collision involving two big-rigs and a car Wednesday caused an explosion that sent flames and clouds of smoke billowing and collapsed a highway overpass just north of Detroit, Michigan. 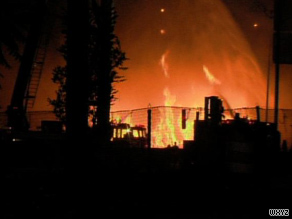 Fire rages at the site of a tanker crash and overpass collapse on I-75 north of Detroit, Michigan, Wednesday.

One of the tankers was traveling on the Interstate 75 about 8:30 p.m. in Hazel Park, near the Nine-Mile overpass, when the collision caused an explosion, said Lt. Shannon Simms of the Michigan State Police.

It was headed northbound, said Bill Shreck of the Department of Transportation. Hazel Park is about 10 miles north of downtown Detroit.

Firefighters put out the blaze late Wednesday and were able to locate all three drivers of the vehicles involved in the crash. The three suffered minor injuries.

One of the tankers was filled with thousands of gallons of fuel, Simms said.

"I just saw a huge ball of flame go up when I was at the red light, just went up in flame," said witness Mary Greib. "I took off running."

Said another witness, who did not want to be identified: "We had a woman in a light-colored, midsized vehicle of some sort that was hesitant to pass the tanker. A number of vehicles were attempting to go around her in different directions."

He said he was one of them, and passed her on the right, after which the explosion occurred.

"We are not sure what happened," he said.

Vince Brennan said he was on the eighth floor of a nearby building when he heard the explosion coming from where "a vicious curve" exists on the highway.

"I heard a whole bunch of boom, boom, boom," he said. He ran to the window and looked down on a McDonald's restaurant. "You couldn't even see it, it was so black with smoke," he said. "The flames had to be 30, 40 feet in the air."