From Dugald McConnell
CNN's "The Situation Room with Wolf Blitzer"

(CNN) -- A report earlier this week that a pair of academics had discovered a way to figure out a person's Social Security number based on information people commonly post online has raised new concerns about identity theft. 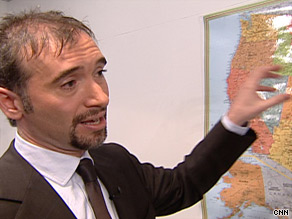 The Social Security Administration said the threat is minuscule. Still, the agency plans to change to a random system of assigning the numbers, replacing the current system based on the state and date where the number is assigned.

"We can use these death master file records to infer patterns" in the way numbers are assigned, said Acquisti, who then derived formulas to zero in on a range of Social Security numbers that might have been assigned to a person.

Because the process depends on the date the Social Security number was assigned, it works best for people born after the late 1980s, when it became common to issue numbers to newborns.

Social Security numbers are made up of three segments. The first segment of three numbers represents the state issuing the number. States with a large population, such as New York, cycle through dozens of numbers, while less populous states, such as Wyoming, use only one.

The second segment is made up of two numbers that are changed periodically, while the third segments is composed of four numbers that cycle continuously from 0000 to 9999.

Knowing a person's state and place of birth, Acquisti would use the death master file to find the numbers of people with nearby birth dates in the same state. Those would be plotted on a graph that would allow Acquisti to try to predict the target person's number.

To avoid giving criminals too much information, Acquisti and Gross withheld some of the details of their methods.

In a small state like Delaware, the report says, for 1 in 20 people the Social Security number can be determined in less than 10 tries.

Mark Lassiter of the Social Security Administration said the threat is not significant. "The public should not be alarmed by this report because there is no foolproof method for predicting a person's Social Security number," he said.

Indeed, for 90 percent of people, Acquisti wouldn't hit on their full Social Security number even with 1,000 tries.

"The method by which Social Security assigns numbers has been a matter of public record for years," said Lassiter. "The suggestion that Mr. Acquisti has cracked a code for predicting an SSN is a dramatic exaggeration."

Still, the authors said a determined hacker could use trial and error to try dozens of educated guesses on fraudulent credit applications -- or even use a computer to automate the effort.

At a minimum, they say, their findings are a wake-up call for people who have posted their date and state of birth on Web sites like MySpace or Facebook.

"This is the challenge we face in our modern technology," Acquisti said. "By interacting so much and exposing so much information, we also sometimes expose ourselves to risk."

Starting next year, the government plans to assign numbers randomly, which will protect anyone born after 2010 from mathematical calculations. But for everyone born in the past 20 years, Acquisti said, something besides the Social Security number should be used for bank accounts and credit cards.

"Social Security numbers are very bad passwords," he said. "They were not designed to be used in that way."