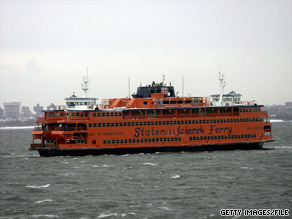 The New York Fire Department estimates that 750 to 800 passengers were aboard the Staten Island Ferry.

Coast Guard boats were on the scene, the St. George Terminal on the north shore of Staten Island.

The Coast Guard spokesman compared the ferry's loss of power as it neared the pier to a car losing its brakes.

The hard landing occurred at 7:10 p.m., according to the Coast Guard. The New York Fire Department estimated that 750 to 800 passengers were aboard. The impact did not send any passengers overboard, the spokesman said.

Representatives for the Staten Island Ferry did not respond to calls for comment.