(CNN) -- A panel of New York National Guard officers has recommended that an Iraq war veteran who acknowledged his homosexuality must leave the service, his supporters said Tuesday. 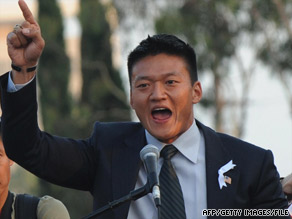 First Lt. Dan Choi, shown at a gay protest rally in May in California, disclosed in March that he was gay.

First Lt. Dan Choi disclosed in March that he is gay, challenging the 1994 "don't ask, don't tell" law that requires the military to discharge troops who disclose their sexual orientation. Tuesday's ruling, made after a daylong hearing, is a step toward stripping Choi of his officer's commission and ending his career.

"It's disappointing, but not unexpected," said Sue Fulton, a spokeswoman for Knights Out, a group of gay and lesbian West Point alumni Choi helped found.

Fulton said the Guard's Federal Recognition Board heard from members of Choi's unit, his commanding officer and fellow soldiers who served in Iraq, and reviewed more than 150 letters of support for Choi, a 2003 West Point graduate and an Arab linguist.

"At the end of the day, they did not consider any of that material [to] whether he was a good soldier," she said. "It was solely about whether he said he was gay."

The closed-door hearing began Tuesday morning before the board, which certifies that Guard officers meet the standards of the regular Army. Its decision came after several hours of deliberation Tuesday afternoon.

The hearing is considered a confidential personnel matter, and the service won't comment on the results, said Lt. Col. Paul Fanning, a National Guard spokesman.

The board's recommendation must be approved by the commander of the U.S. 1st Army, which oversees the National Guard and Army Reserve. But Choi's public declaration is "a finding of fact that the board has to deal with," Fanning said.

"The Army has no choice but to follow through with that," he said.

Choi transferred from the active-duty Army to the National Guard in June 2008, Fanning said. He served as an infantry platoon leader in Iraq in 2006 and 2007 and, like many soldiers, had his yearlong tour of duty extended by three months.

Choi served as celebrity grand marshal of the San Francisco, California, Gay Pride Parade over the weekend. He told CNN's "American Morning" on Monday that he is acting on "the lessons that I learned at West Point -- honesty and courage and integrity."

President Obama campaigned on a pledge to repeal "don't ask, don't tell" and has been criticized for not moving faster on that goal since taking office in January. He told gay-rights advocates at a Monday night reception at the White House that his administration is already working with House and Senate members to get the law changed.

"It's not for me to tell you to be patient any more than it was for others to counsel patience to African-Americans who were petitioning for equal rights a half-century ago," Obama said. But he added, "I do have a responsibility to see that this change is administered in a practical -- and a way that takes over the long term."

Fulton said that while Obama can't change the law himself, he could sign an executive order halting discharges while the policy is under review.