(CNN) -- Eleven-year-old Ewelina Bledniak was looking at a year split from her parents, split from her friends, away from everything she loves about living in America. 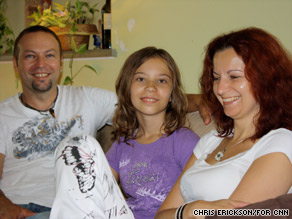 Ewelina Bledniak hopes to stay in the United States with her parents, Hubert and Agnieszka.

The federal government was ready to deport Ewelina to her native Poland because when she was 3 years old, the family missed a deadline to file a key immigration document.

"I love going to school here, and my friends, I'm going to miss them," Ewelina said as she worried about being deported. "I like living here."

But things are looking up. An Immigration and Customs Enforcement attorney last week asked the U.S. Immigration Court in Atlanta, Georgia, to reopen Ewelina's case and terminate the deportation proceeding ICE had initiated. The motion asks the court to send the case back to U.S. Citizenship and Immigration Services for resolution.

"They seem to be willing to find a favorable solution to this matter," said Ewelina's attorney, Maria Odom of Atlanta. "... It's good news for the child, absolutely."

Her father, Hubert, came to the United States legally and is a naturalized U.S. citizen; and her mother, Agnieszka (Agnes), also arrived legally and is a legal resident. Ewelina is neither.

Under a temporary amnesty program at the turn of the 21st century, illegal immigrants could seek legal status without returning to their home countries. However, a previous lawyer for the Bledniak family missed an April 2001 deadline to file the petition, the Bledniaks say.

Years later, when it realized Ewelina had never achieved legal status, ICE ordered her to return to Poland to apply for legal U.S. residency through the U.S. Embassy there. That process could have taken a year, Odom said.

The government gave Ewelina until July 23 to leave the country voluntarily; after that date, she would be deported and ineligible to return to the United States for 10 years, Odom said. The family has booked a July 20 flight to Warsaw, Poland, where the parents planned to stay for a few weeks before leaving the girl with her maternal grandmother while the immigration process played out.

"The feeling of waking up and just being in Poland, it's going to be, like, confusing," the soft-spoken sixth-grader said before getting the good news. "And, like, both of my parents aren't going to be there, and my friends. ... There's nothing that's going to be the same."

The law requires immigrants in Ewelina's situation to return to their home countries, even if it means separating children from their parents, Odom said.

"This is very typical of a lot of family immigration cases, and it creates a lot of family separation," Odom said. "It sends children to countries that they don't know anymore. It separates mothers and fathers that often have to go back to the home countries to legalize."

The case has received attention in the mainstream media and the blogosphere, putting pressure on the federal government to relent.

A U.S. Citizenship and Immigration Services representative told CNN on Friday that the agency would have no comment on the case until it is resolved.

Ewelina speaks English and Polish, but fears she doesn't speak Polish well enough to thrive in school in Poland.

Hubert Bledniak, who owns a tile business, questioned the morality of the immigration policy and the emotional effect it could have on his daughter.

"I know law is law and you have to follow the rules, but I don't think it makes sense to separate families like that, especially when she is only 11 years old and it's going to be hard for her," he said.

"I think she's going through something like, you get family separation because of divorces and stuff like that, and that's how children react," he continued. "And I think she's lost and confused [because of] what's going on with her life."

The family earlier had planned a vacation trip to Poland to visit with relatives and to give Ewelina a chance to learn about her heritage. Ironically, however, if she receives a favorable decision from CIS, Ewelina can't leave the United States until she gets her green card, Odom said.

"I think she'd much rather be stuck here," Odom said.

"I am an immigration attorney, and I see families being separated every single day because of our law," she said. "Our law is designed for enforcement primarily, and it really does not have family unity as a priority. And that is part of the reason why this system is so broken: because our government is not taking into consideration the human aspect of the effect of that law."