(CNN) -- The boy writhes uncontrollably on the floor, but the church members remain calm, if increasingly loud. They're trying to drive a "demon" out of him. 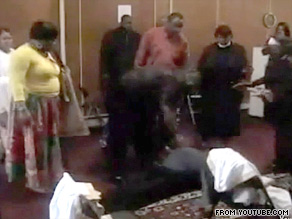 In the video, Manifested Glory Ministries members gather around a boy in Bridgeport, Connecticut.

"You homosexual demon, get up on outta here!" they say. "You demon, loose yourself!" "You sex demon ... you snake!"

The shouts, the convulsions, the references to homosexual spirits -- they are all captured on a video posted on YouTube by the Manifested Glory Ministries. The video has sparked anger among gay youth advocacy groups and put the small church from Bridgeport, Connecticut, in the middle of an ongoing national debate on gay issues.

Patricia McKinney, pastor of the nondenominational church who describes herself as a prophet, said she has even been receiving death threats as a result of the video, but doesn't understand the outrage.

"I believe in deliverance, I believe in anointing, I believe in the power of Jesus," she said in a phone interview with CNN. "I've been threatened already, I've been attacked, and it doesn't make any sense to us. Really, what they're doing, they're putting me out there on the mat."

McKinney says she doesn't refer to the events of the video as an exorcism, but rather a "casting out of unclean spirits." She said this isn't the first time that an event like this has taken place at her church, but it is the first one centered around homosexuality.

McKinney said the boy approached the church and told her he wanted to be a pastor, but was struggling with his sexuality. "We allow [gay people] to come into our church. We just don't allow them to come in and continue to live that lifestyle," she said.

Robin McHaelen, who worked with the 16-year-old boy at the center of the video in her position as executive director of True Colors Inc., a gay youth advocacy and mentoring program in Connecticut, said the video was taped in March. She would not identify the teen.

McHaelen said she doesn't think the church acted maliciously -- but that's part of her problem with the video.

"None of the people in this video were intending to hurt this kid," she said. "They performed this ritual in an attempt to rid him of feelings that he didn't want to have."

The boy is the fifth teen True Colors is aware of that has undergone an event like the one documented in the video. But unlike the boy, not all the teens approached a church or religious organization.

The event, McHaelen said, reflects a culture and society that doesn't believe a person can be both Christian and gay.

"That's what makes me so sad and so mad," she said.

McHaelen said she talked to the boy since the incident and said he's feeling very conflicted and confused in trying to reconcile who he is with his religion.

"He's 16 and having the feelings that he's having, the relationships he's having, and then [he's] being tormented by 'What if I'm going to go to hell because of what I feel and who I am?'" she said.

McHaelen notified the Connecticut Department of Children and Families, as she's mandated to do in her position when she suspects abuse or neglect of a minor. However, she told CNN the department will be looking into whether or not abuse or neglect occurred by the parents and family of the boy, not the church. The department declined to comment Thursday.

Isaiah Webster, Director of Communications for the National Youth Advocacy Commission, said he was deeply saddened by the timing of the video and the accompanying uproar.

"It's very, very sad that this still takes place in society," he said. "It's also very sad that it comes about during this week, [as the] 40th anniversary of Stonewall is this weekend."

The so-called "Stonewall Riots" are believed by many to have kicked off the gay liberation movement.

"That is really something to celebrate," Webster continued, "and it's unfortunate that young people still have to endure things like this."

McHaelen said that as an advocacy group, she doesn't think True Colors can take any legal action against the church, and said she would rather engage in an open dialogue with its members.

All About Connecticut • Gay and Lesbian Relationships • Religion