WASHINGTON (CNN) -- A former commanding general of the District of Columbia National Guard -- who ordered jets over the Capitol amid the September 11, 2001, terror attacks -- was among those killed in a transit train crash in Washington this week, authorities said Tuesday. 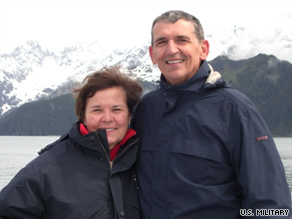 Retired Maj. Gen. David F. Wherley Jr. and his wife, Ann, both 62, were killed along with seven others Monday in the most deadly train crash in the history of the Washington Metropolitan Area Transit Authority.

"He was as fine a public servant, as dedicated to the United States of America ... as anyone I have ever met," Washington Mayor Adrian Fenty told reporters Tuesday.

On the morning of the September 11 attacks, Wherley, commander of the 113th Fighter Wing at Andrews Air Force Base, deployed pilots with orders from then-Vice President Dick Cheney to protect the White House and take out any aircraft that threatened the Capitol, according to the 9/11 Commission Report.

"They said challenge them, try to turn them away; if they don't turn away, use whatever force is necessary to keep them from hitting buildings downtown," Wherley told the Washington Post in a 2002 interview.

"I am personally grieved by this unbelievable tragedy," said Maj. Gen. Errol R. Schwartz who succeeded Wherley when he retired.

The Wherleys are survived by a son, David, a noncommissioned officer in the U.S. Army Golden Knights; a daughter, Betsy; and one grandchild, according to the National Guard.

The seven others killed in the collision were: train operator Jeanice McMillan, 42, of Springfield, Virginia; Mary Doolittle, 59; Lavanda King, 23; Veronica Dubose, 26; Cameron Williams, 36; and Dennis Hawkins, 64, all of Washington; and Ana Fernandez, 40, of Hyattsville, Maryland.

All About The White House • U.S. Capitol • September 11 Attacks