Stars and Stripes accuses U.S. military of censorship in Iraq

WASHINGTON (CNN) -- Stars and Stripes, the newspaper that receives U.S. military funding to help it cover and get distributed free to American forces in war zones, complained Tuesday of censorship by military authorities in Iraq. 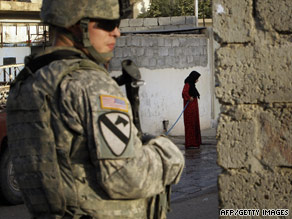 A soldier with the U.S. Army's 1st Cavalry Division patrols the streets of eastern Mosul, Iraq, on June 16.

In a story on its Web site, the newspaper known as Stripes said the military violated a congressional mandate of editorial independence by rejecting a request to embed reporter Heath Druzin with the U.S. Army's 1st Cavalry Division, which is attempting to secure the city of Mosul.

The military cited various problems in Druzin's reporting on previous embed assignments with units of the division, according to the story.

One example noted by the military was a March 8 story that said many Mosul residents would like the American soldiers to leave and hand over security tasks to Iraqi forces, the Stripes Web site said.

"Despite the opportunity to visit areas of the city where Iraqi Army leaders, soldiers, national police and Iraqi police displayed commitment to partnership, Mr. Druzin refused to highlight any of this news," Maj. Ramona Bellard, a public affairs officer, wrote in denying Druzin's embed request, according to the Stripes story.

A military official in Iraq defended the move to turn down the reporter's request.

"U.S. Army units in Iraq remain committed to the media embed program and appreciate objective media reporting," said Lt. Col. David H. Patterson Jr., a spokesman for Multi-National Corps-Iraq. "The relationship that Druzin established with the command during a previous embed did not facilitate being invited back."

Patterson added that Druzin was welcome to embed in another unit and that the 1st Cavalry Division was open to having a reporter other than Druzin.

"Accusations of censorship are without merit," Patterson said.

Other allegations against Druzin by the military included that he used quotes out of context, behaved unprofessionally and persisted in asking Army officials for permission to use a computer to file a story during a communications blackout period, the Stripes story said.

"To simply say 'you can't send him because we didn't like what he wrote' is unacceptable," Leonard said. He noted that Congress set up Stripes as an independent newspaper so that "no commander can decide what news troops in the field receive."

Stripes rejected those offers because the military has no right to deflect coverage from Mosul or decide which Stripes reporter covers its operations, Leonard said.

"To deny Mr. Druzin an embed under the reasons stated by Maj. Bellard is a direct challenge to the editorial independence of this newspaper," Leonard wrote in his appeal to the decision, according to the Stripes story. "That independence is mandated by Congress. The denial of the embed constitutes an attempt at censorship and it is also an illegal prior restraint under federal law. ... The military cannot tell us what stories to write or not write."

Stripes receives close to $10 million a year from the Department of Defense to help defray the costs of covering "contingency" operations in Iraq and Afghanistan, including the publishing and distribution of roughly 85,000 free newspapers a day, Leonard said.

The newspaper receives additional government subsidies, with the total amounting to less than half of its budget, he said. Other revenue comes from ad sales and circulation at permanent U.S. military bases and elsewhere, Leonard said.

CNN has been denied embed requests on occasion but never because of the past conduct of individual journalists. The reasons have almost always involved logistical details involving security and force coverage.