WASHINGTON (CNN) -- Steve Bierfeldt says the Transportation Security Administration pulled him aside for extra questioning in March. He was carrying a pocket edition of the U.S. Constitution and an iPhone capable of making audio recordings. And he used them. 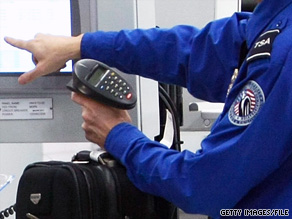 On a recording a TSA agent can be heard berating Bierfeldt. One sample: "You want to play smartass, and I'm not going to play your f**king game."

Bierfeldt is director of development for the Campaign for Liberty, an outgrowth of the Ron Paul presidential campaign. He was returning from a regional conference March 29 when TSA screeners at Lambert-St. Louis (Missouri) International Airport saw a metal cash box in his carry-on bag. Inside was more than $4,700 dollars in cash -- proceeds from the sale of political merchandise like T-shirts and books.

There are no restrictions on carrying large sums of cash on flights within the United States, but the TSA allegedly took Bierfeldt to a windowless room and, along with other law enforcement agencies, questioned him for almost half an hour about the money.

The American Civil Liberties Union has taken up Bierfeldt's cause and is suing Secretary of Homeland Security Janet Napolitano, whose department includes the TSA. Their complaint alleges that Bierfeldt was "subjected to harassing interrogation, and unlawfully detained."

Larry Schwartztol of the ACLU said the TSA is suffering from mission creep.

"We think what happened to Mr. Bierfeldt is a reflection that TSA believes passenger screening is an opportunity to engage in freewheeling law enforcement investigations that have no link to flight safety," he said.

Schwartztol believes many other passengers have been subjected to the same kind of treatment, which he claims violates constitutional protections against unlawful searches.

The TSA wouldn't comment on the lawsuit, but said in a statement that the movement of large amounts of cash through a checkpoint may be investigated "if suspicious activity is suspected."

Unbeknownst to the TSA agents, Bierfieldt had activated the record application on his phone and slipped it into his pocket. It captured the entire conversation.

Officer: Why do you have this money? That's the question, that's the major question.

Officer: Answer that question first, why do you have this money.

Bierfeldt: Am I legally required to answer that question?

Officer: So you refuse to answer that question?

Bierfeldt: No, sir, I am not refusing.

Officer: Well, you're not answering.

Bierfeldt: I'm simply asking my rights under the law.

The officers can be heard saying they will involve the Federal Bureau of Investigation and the Drug Enforcement Administration, and appear to threaten arrest, saying they are going to transport Bierfeldt to the local police station, in handcuffs if necessary.

Bierfeldt told CNN he believes their behavior was inappropriate.

"You're in a locked room with no windows. You've got TSA agent. You've got police officers with loaded guns. They're in your face. A few of them were swearing at me."

But the officers did not follow through on their threats. Near the end of the recording an additional officer enters the situation and realizes the origins of the money.

Officer: So these are campaign contributions for Ron Paul?

Officer: You're free to go.

According to the TSA, "Passengers are required to cooperate with the screening process. Cooperation may involve answering questions about their property. A passenger who refuses to answer questions may be referred to appropriate authorities for further inquiry"

Bierfeldt contends he never refused to answer a question, he only sought to clarify his constitutional rights.

The TSA says disciplinary action has been taken against one of its employees for inappropriate tone and language.