(CNN) -- One person died and six were injured when a cargo train derailed, causing an explosion and massive fire in Illinois, a fire chief said Saturday. 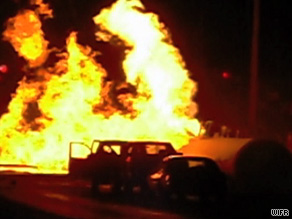 A train carrying chemicals derailed and burned for hours, forcing the evacuation of about 600 homes

Crews were still fighting the blaze at midday, but expected to have it fully contained in the afternoon, said Rockford Fire Chief Derek Bergsten.

"It's under control and we're taking every precaution not to harm firefighters or residents," Bergsten said, adding that federal and state environmental officials were on scene monitoring air and soil samples.

The fatality was a woman, said Winnebago County Coroner Sue Fiduccia. The cause of death had not been determined because Fiduccia was unable to get close enough to examine the body.

Bergsten said six people were injured, and all train workers were accounted for.

The train was carrying chemicals that burned for hours, forcing the evacuation of about 600 homes in the town about 50 miles (80 kilometers) northwest of Chicago, authorities said.

Officers were called to the scene near Rockford about 8:30 p.m. Friday, a city police spokeswoman said. The derailment involved automobiles, but it was unclear whether they were on the tracks, she said.

Three motorists who were stopped at a train crossing were burned, one severely, Bergsten said.

One of the victims, who tried to run from the blaze, suffered second-degree burns on his hand while trying to shield his neck from flames, according to Bergsten.

At least 14 cars of the 114-car train caught fire after the derailment, officials said.

The rest of the Canadian National Railway train -- including 70 cars carrying ethanol, a colorless, highly flammable liquid -- was disconnected and moved away from the blaze, Bergsten said.

CNN's Greg Morrison and Shawn Nottingham contributed to this report.