(CNN) -- Angelina Jolie has been a goodwill ambassador for the United Nations High Commission on Refugees since 2001. 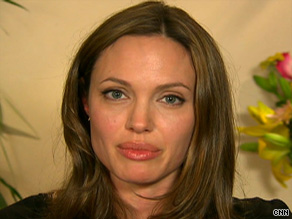 The actress-humanitarian paid tribute at a ceremony Thursday to the 10.5 million refugees now recognized by the Commission. The ceremony was part of several events leading up to World Refugee Day on Saturday.

The UNHCR announced Thursday that she and her partner, Brad Pitt, have donated $1 million to help Pakistanis displaced by fighting between troops and Taliban militants.

She talked with CNN's Anderson Cooper about her visits to refugee camps and her deep passion for the work that takes her far from Hollywood and her own family.

Anderson Cooper: Angelina, is there one refugee crisis right now that concerns you the most?

Angelina Jolie: Pakistan, because it's relatively new and the numbers have jumped so quickly. I think in the last few weeks, there were about 100,000 displaced a day. There's over 2 million now.

I think it's just there has been a giant appeal, a lot of funds have been sent in, a lot of aid has come to the people. As much as it can. But the numbers are so extraordinary and they're growing.

Cooper: You visited Afghanistan, just next door to Pakistan, several months ago, U.S., obviously, sending more troops there. Do you see the situation in Afghanistan getting worse at this point?

Jolie: From what I understand, the people I spoke to that I was with just a few months ago, they have lost certain areas that they were able to bring aid, have now become out of bounds for them. And it's more and more dangerous for them to work for the refugees and to aid them.

Cooper: Do you see the situation in Afghanistan getting worse at this point?

Jolie: They've lost certain areas they were able to bring aid, have now become out of bounds for them. It's more and more dangerous for them to work for the refugees and to aid them.

Cooper: On a personal level when you go to a place like Afghanistan, Do you worry? Do your kids worry? How do you explain to them what you're doing?

Cooper: You probably hear the same stories over and over, yet each person is an individual and each person has a story and a tale to tell. Are there individuals that you keep thinking about? People who you remember who stay with you?

Jolie: There is a young boy I met who was about 15 who had been shot in the back and paralyzed. His whole family had been killed. He was completely on his own. Yet he had this really remarkable, unbreakable spirit, a spirit beyond anything I can imagine having.

The things we complain about on a daily basis. He had lost everything and was just so full of laughter and kindness. He passed away a few months after I was there and I always wondered, you know, it's those kind of young people that you meet and you just think, God, in any other situation if this person had been given a chance, what an extraordinary adult he would have been.

How extraordinary for his country, for his family, if he ever had a chance to have one. Instead, he had so many horrible things happen to him in his life. He taught me a lot about just the strength, the spirit. I think of him and I can't complain about anything. I can't do anything but be grateful for what I have.

Jolie: Absolutely. I guess in more ways than I can probably understand. I just know that I think of my children's education, and more than thinking I want to make sure they understand math or they're good at this.

I want to make sure they go out into the world, as I've been fortunate enough to do, in whatever way they can and really see the way other people live and meet these other children that are so strong, that are so grateful, with so little and are such strong survivors.

All About Angelina Jolie • United Nations High Commissioner for Refugees