GREENVILLE, Alabama (CNN) -- Willie Thornton is on a rescue mission. One morning in March he set out to save Desmond Dunklin, a 19-year-old who should have graduated last year from Greenville High School in Greenville, Alabama. 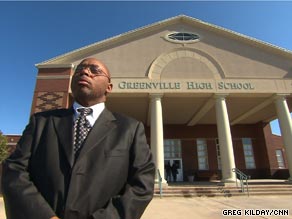 "I need for you to show up," Thornton tells a sleepy Dunklin, who clearly has just been awakened by the men's repeated knocking on his door.

Thornton has been teaching for 16 years, but this is his first year running the dropout prevention program. It is his job to mentor, encourage, counsel and cajole 70 students considered at-risk for dropping out. His school in rural Butler County claims a 75 percent graduation rate, but a number of those kids don't get out within four years. The Southern Education Foundation, an education research group, says only about six in 10 students in Butler County graduate within four years.

The number sounds shockingly low, but it's actually not far off the national average. A 2008 study by America's Promise Alliance, a group founded by former Secretary of State Colin Powell, concluded that only 52 percent of students in the nation's 50 largest school systems graduate in four years. About 57 percent of Hispanic and 53 percent of African-American students graduate with a regular diploma in four years, according to the study, which puts the national graduation rate at 70 percent.

"Finishing high school is absolutely basic to being a success at any place in our society. We can't afford this," Powell said.

This July, Soledad O'Brien investigates what African- Americans are doing to confront the most challenging issues facing their communities. You'll meet people who are using ground-breaking solutions in innovative ways to transform the black experience.
Wednesday, 9 p.m. & Thursday, 8 p.m. ET

"If we lose these youngsters from our educational system, it doesn't mean they're all going to jail," Powell said. "It just means they're not going to have the same earning potential as they would if they finished school. And ultimately that will affect them, and it will affect the nation."

"I need to finish school," Dunklin says after a meeting with Thornton and his mother. "My mama wants me to graduate, tells me I can't get a job if I don't graduate."

She's right. Even people with diplomas struggle to find work in Butler County.

"Our stores, Wal-Mart, eatery places are really demanding our students have high school diplomas, and we respect that," Thornton said. "We really respect that because we want them to be completers."

In March, Thornton and hundreds of other educators, business leaders and grassroots activists gathered to brainstorm ways to solve the dropout problem.

The meeting was funded in part by America's Promise Alliance, which is chaired by Powell's wife, Alma Powell. One of the charity's goals is to hold more than 100 of these dropout prevention summits across the country and raise alarm bells and create an army of foot soldiers like Thornton to crush the problem General Powell calls a "catastrophe."

Alma Powell: Every 26 seconds a child drops out of school »

"It's a ground game," he said. "There's no Hail Mary pass. This is going to be a yard-at-a-time as we go after this problem."

Alma Powell was the featured speaker at the dropout prevention summit Thornton attended.

Thornton is someone who doesn't give up. In late May, Dunklin, donned the green cap and gown of Greenville High School, walked across the stage and received a folder and a handshake from principal Charles Farmer.

Dunklin didn't earn a diploma; he received a certificate indicating he finished coursework in an independent study program. Alabama still considers him a dropout; he must complete more classes and tests to receive an actual diploma.

It's a start, Thornton says.

"The benefit is basically for a student to say that 'I can' and 'I've raised my self-esteem enough,' because prior to that most of them in their hearts have already quit," Thornton said.

"What we do here [in the dropout prevention program] is try to gain some sort of success story that they own. And we try to build story by story. That gains a lot of energy and hope," he said. "When you lose hope, you lose everything."

Dunklin insists he is done with school, but Thornton still hasn't given up. "I think once he starts seeing what he needs. He'll come back."

All About Colin Powell • Education