(CNN) -- Biologist Matt Aresco has been carrying a big burden for years. 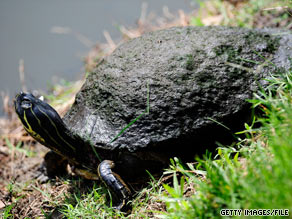 A biologist says that wherever he can get it, he'll take money to protect turtles from a killer stretch of road.

He's made it his mission to save thousands of turtles from near-certain death on one of the worst turtle-killing highways in America, U.S. Route 27 just north of Tallahassee, Florida.

The road skirts Lake Jackson, but that didn't stop the turtles from wanting to get to the other side. In three years, Aresco counted nearly 9,000 dead turtles.

"There were days when I would find 200 turtles attempting to cross," he told CNN. "It was unreal."

But what sounds unreal to some in Washington is the solution to the turtle trouble: $3.4 million in federal stimulus money to build a series of walls and tunnels under the highway so the turtles and other creatures don't have to take on the cars and trucks roaring overhead.

U.S. Sen. Tom Coburn, an Oklahoma Republican, highlighted the turtle crossing in a blistering report on what he called the 100 worst projects in the stimulus bill.

"They are wasteful projects, and most of us don't want to steal money from our grandkids to do something that's really stupid right now," he said.

Members of the turtle contingent in Florida were less than thrilled to be singled out.

"You've got 30- to 40-pound box turtles as big as a manhole cover, and 12-foot alligators," said Leon County Commissioner Cliff Thaell. "Now if Sen. Coburn was to drive his SUV speeding down Highway 27 [at] 60 miles per hour tonight and met one of those fellows, he would have an unpleasant encounter."

But according to the White House, the stimulus money is all about jobs, not turtles. Thaell said he expected "dozens" of jobs to be created in the construction of the tunnels, but he could not be precise.

The jobs that will last only as long as it takes to build the tunnels, and Aresco says he'd rather get the money to help the turtles from other sources. But after years watching the creatures die, and trying to slow the carnage with makeshift fences, he says he'll take the money wherever he can get it.

All About Washington, DC • Florida • Reptiles and Amphibians • Economic Stimulus