Editor's note: CNN Contributor Bob Greene is a best-selling author whose new book, "Late Edition: A Love Story," will be published next month. 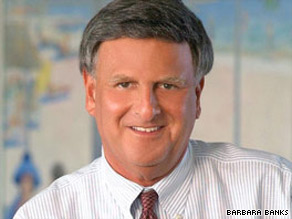 You know the kind of boss I'm talking about:

Finds out what makes his employees most contented and proud, and then takes steps to make certain that portion of their job is eliminated, just to show that he has the power to make such decisions.

That kind of boss.

Johnny "Red" Kerr, who died earlier this year, was a longtime broadcaster for the Chicago Bulls (he also was the team's first coach). A big, amiable man, Red Kerr was about as beloved a figure in Chicago as a person can possibly be.

People were vaguely aware that Red had once held the record for most NBA games played in a row. He had been a powerful center for the Syracuse Nationals, and then was traded to the Baltimore Bullets. Starting in 1954 and going straight through to the 1965-1966 season, Red Kerr played in 844 consecutive professional basketball games, never missing a night.

The reason I'm thinking about him now, and about what bad bosses can do to a person, is that this month, the player who eventually broke his record -- Randy Smith -- died in Connecticut. The obituaries mentioned that he had surpassed Red's consecutive-game mark.

I became friendly with Red during the Bulls' six-championship run in the 1990s, when he was broadcasting the games. And one day, he told me how his Iron Man streak as a player had ended. There was sadness behind his eyes as he talked about it.

In baseball, Lou Gehrig's 2,130-consecutive-game streak ended when he became too ill to play. When Cal Ripken, decades later, caught up with Gehrig's record and then passed it, he eventually decided on his own when he would finally sit out for a game and end the run.

"I felt like I could go on forever," Red told me. "Nothing could stop my streak."

Which brings us back to lousy bosses.

Kerr, in that 1965-1966 season, had been traded to Baltimore. He was always extremely popular with fellow players; in that first season with the new team, he was named captain.

He was never a flashy player or a showboat; he took pride in coming to work every day and putting in a complete effort. That's why his consecutive-games record meant so much to him. He endured. On nights he had a fever, on nights he was in pain, on nights when his children were born, it is what Red Kerr did more conscientiously than anyone else who had ever played his sport: No matter what, he showed up for work and he endured.

One night, the night that would have been his 845th straight game, he came to the arena for a contest against the Boston Celtics. His new coach in Baltimore -- Paul Seymour -- didn't start him, which was unusual.

Red figured that Seymour just wanted to change the rotation a little. He figured that he would get into the game after the first time out.

"But I sat on the bench," Red told me, "and the first quarter went by, and the second, and the third."

This was a man who had played in more consecutive basketball games than anyone in history. The captain of the team. He wasn't injured. He wasn't sick.

"The fourth quarter went by," Red told me. "We were losing -- that's the worst part, the team could have used my help. I looked at the clock, and I just got this terrible, sinking feeling in my stomach."

At the end, he said, he couldn't even look -- he had his head down. The game concluded; the streak that had meant more to him than anything else in his professional life was over.

Why had his coach done it? Why had he ended Red Kerr's dream?

"In the locker room after, Seymour just told me that it had to end sometime," Kerr said. "He told me, 'This will take the pressure off you. You won't have to worry about it.' But there was no pressure -- I already held the record. And I wasn't worried -- I just came to the arena every night and played."

The next night, Red was back in the lineup (he would play for the remainder of that season, and then retire). But part of his heart was devastated -- and his heart was Red Kerr's defining quality.

He kept his hurt to himself. Even some of his closest friends didn't know. He never said a word to Paul Seymour. Seymour would die in 1998, so there is no opportunity to ask him, today, about this. But can you conceive of Lou Gehrig's manager letting him sit on the bench while his streak was still going, and not even telling him he wouldn't be getting into the game? Can you conceive of Cal Ripken's manager purposely putting an end to his streak?

Red Kerr was known for his ready laugh and his sunny disposition. But he told me:

"I felt terrible. I felt numb. If I was injured or twisted my ankle, I might have understood. It wasn't that my skills had diminished. Eleven-and-a-half years, every game -- and he sits me. And the next night, he puts me back in the lineup. ...

"I tried to hide how badly my feelings had been hurt. Back in that era, the coach was the boss -- you didn't question him. I felt like saying to Seymour, 'If you knew you weren't going to play me, why couldn't you tell me? ... Why couldn't you put me in for a few seconds?' "

Because Red was a gentleman, when Randy Smith, in 1982, passed his old record -- the record that should have been much lengthier, and thus more difficult to surpass -- Red flew to the game to congratulate the new champion. As always, Red had a smile on his face.

But he told me:

"You think that, as the years go by, you'll feel a little better about it. But you don't."

Randy Smith's death this month made me think about all this. About how easily the things that mean the most to us can be taken away, on a callous whim.

How did we get started on this sad tale?

Maybe you've had one.