NEW YORK (CNN) -- Two good Samaritans returned more than $275,000 that tumbled out of an improperly secured armored truck in Syracuse, New York, last week. But some not-so-good Samaritans seem to have walked away with another $60,000 that fell onto the street. 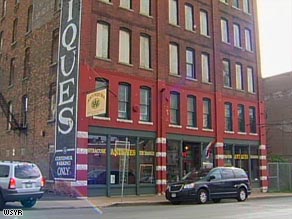 An armored truck inadvertently strewed bags of money on the ground in front of the Syracuse Antiques Exchange.

A Brinks armored truck inadvertently strewed more than a dozen bags of money on the ground in front of the Syracuse Antiques Exchange on Friday, according to Sgt. Tom Connellan of the Syracuse police department.

The bags slipped out of an open door on the side of the truck. Apparently oblivious, the driver proceeded to his intended destination, a Brinks facility a few blocks away.

David Jenks, the owner of the antiques shop, and Hanson Herring, who had just gotten a haircut at a nearby barbershop, Cuttin Up, were the first to approach the bags.

Herring said at first he thought the bags merely contained garbage. Only when he began to inspect one did he realize, "Oh man, this is money."

The money was in all different denominations, from coins to $100 bills.

The two men then began to round up the bags and load them into plastic postal bins. Tim Taylor, an off-duty Syracuse police officer who happened to be browsing in Jenks' antiques shop, assisted them.

As word spread that hundreds of thousands of dollars lay in the street, people streamed out of passing cars and adjacent businesses. For the most part the gatherers cooperated in the recovery effort.

Herring attributed the crowd's willingness to turn over the money -- rather than run away with it -- to his imposing stature. "Had I not been the size I was, it might have went a different way."

One man did display some reluctance to part with the bag he found. But Herring said that with a few words, he was able to persuade the man to release his grip on it.

But two bags containing some $60,000 are still missing.

Police said it remains unclear whether the missing bags fell from the truck at an earlier point along its route, or whether someone at the scene of the main spill managed to discreetly slip away with them.

Connellan noted that it is grand larceny, a felony, to keep a sack of money one chances upon. "We tip our hats to the people who did the right thing," he said.

As for the Brinks Co., Herring said it rewarded him with a T-shirt and a gold coin commemorating the company's 150th anniversary.