Dealership has less than a week to sell all its cars

By Dugald McConnell
CNN's "The Situation Room with Wolf Blitzer"

LEESBURG, Virginia (CNN) -- The clock is ticking for Ray O'Bryhim: he has less than a week to sell his last 40 cars. 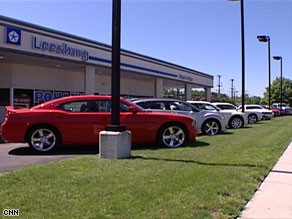 His ads for Pohanka Chrysler-Dodge scream, "Everything must go, regardless of profit!"

On June 9, his franchise to sell new Chryslers and Dodges will be terminated, along with those of almost 800 other Chrysler/Dodge/Jeep dealers nationwide. This comes as a result of Chrysler's announcement last month that they would shrink their dealer base in the United States.

O'Bryhim cannot legally sell any new cars he has left after June 9 -- and because the manufacturer is in bankruptcy protection it isn't obligated to take them back.

A customer comes out of his showroom with the keys in her hand for a new Dodge Nitro SUV she just bought. She won't give her name, because she took the day off work to pounce on the discount. But she says she has been monitoring new-car prices for months, and they just took a steep dive, so she came in and made off like a bandit.

The Situation Room with Wolf Blitzer is the command center for breaking news, politics and extraordinary reports from around the world.
Monday-Friday 4pm ET

His salesmen have sold 80 cars in the 19 days since their termination letter arrived, with the cars and minivans selling faster than the trucks.

Nationwide, Chrysler's terminated dealers had about 44,000 cars sitting on their lots when they got their notifications May 14. Chrysler spokeswoman Kathy Graham says the company plans to help redistribute any leftover inventory to the 2,400 surviving dealers, who could otherwise run low while factories are idled.

"Our manufacturing facilities have been shut down since May 1," she said. "We have dealers that are looking for inventory."

Down the street at Dulles Motor Cars, Hamid and Kevin Saghafi have sold off about half their $1.5 million inventory of Jeeps.

Hamid says they are "taking a beating," asking $10,000 less than the invoice price for high-end models like the Jeep Commander. But he still worries they won't be able to sell them all in time.

"Chrysler has told us they're going to help us send these cars to other dealers' inventories," he says. "But we don't know what kind of prices we're going to be offered."

The affected dealerships are not only furiously trying to sell off their inventory; at the same time, they are trying to figure out what they will do once they stop selling new Chryslers, and how they can save the jobs of their employees. Pohanka will focus on service and used-car sales, or maybe switch to another brand; Dulles will focus on the two other brands they already sell, Subaru and Kia.

How much do the Saghafi brothers stand to lose in shutting their Jeep showroom?

All About Chrysler LLC • Cars and Car Design