WASHINGTON (CNN) -- The Obama administration has informed a federal judge it will continue to invoke the "state secrets" privilege in a legal battle with an Islamic charity suspected of funding terrorism. 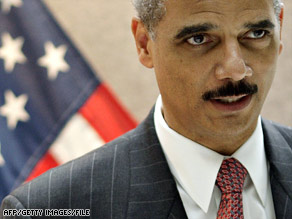 Attorney General Eric Holder has ordered a review of the government's use of the "state secrets" privilege.

The United States has designated the Oregon-based al-Haramain Islamic Foundation as a terrorist organization. The group, which has sued the government over alleged warrantless wiretapping, is demanding classified information about the program.

U.S. officials have refused to tell the charity's lawyers whether the group was subjected to presidentially authorized, warrantless, foreign intelligence surveillance in 2004 and, if so, what information was obtained.

In a court document filed overnight in San Francisco and released early Saturday in Washington, the Justice Department said its case-by-case review of the government's use of the state secrets defense has not changed its position in the al-Haramain case.

The defense allows courts to block lawsuits against the government on grounds that the litigation could harm national security.

"An additional review was conducted at the highest levels of the Department of Justice to determine whether continued invocation of the privilege was warranted," the government told the court.

"Based on that review, it is the government's position that disclosure of classified information ... would create intolerable risks to national security."

Attorney General Eric Holder has ordered a review to determine whether the government's use of the state secrets privilege can be sharply narrowed. The government brief, however, reveals the legal tool will continue to be used despite strong objections from civil liberties groups and their political allies.

"The government does not take this position lightly," Justice Department lawyers told Judge Vaughn Walker, who has been unsympathetic to the government stance.

"An assertion of the state secrets privilege to preclude further litigation is an extremely significant step that requires in-depth consideration and debate at the highest levels of our government," the Justice document says.

All sides acknowledge the importance of the case.

"The government recognizes that the underlying dispute in this case raises the fundamental separation of powers question concerning whether the court has the ultimate authority under the Foreign Intelligence Surveillance Act (FISA) to order the disclosure of state secrets to a private party over the government's objections," according to the justice filing.

The immediate issue is Walker's May 22 order to show cause as to why the government should not be sanctioned for "failing to obey the court's orders" to turn over classified information.

The government insists it has not yet received a direct court order to do that, and has only refrained from "agreeing" to do so. The government vowed a swift appeal once it receives such an order.

The Obama administration argument concludes with a direct challenge to the judge "to recognize that the imposition of discovery sanctions is not a lawful, appropriate, or productive alternative."

In 2007 the 9th Circuit Court of Appeals overturned a ruling by Walker in the same case in which he had rejected the government's state secrets privilege. The ruling, however, left unanswered whether the FISA law could preempt the state secrets privilege, so al-Haramain went back to court to continue the fight on that issue.