NEW YORK (CNN) -- The family of a woman who died ignored on an emergency room floor has reached a settlement with Health and Hospital Corp., the family's lawyer and the company's top executive said Thursday. 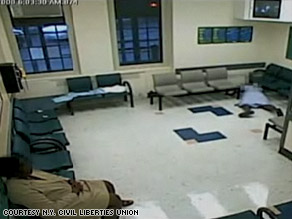 Surveillance video shows Esmin Green on the hospital floor for more than an hour before anyone helps her.

The attorney, Sanford Rubenstein, said the settlement, reached Wednesday, is for $2 million.

Alan Aviles, the president and CEO of Health and Hospital Corp., said in a written statement that the company -- which operates Kings County Hospital, where Esmin Green, 49, died last year -- takes full responsibility for her death and offers a "full apology."

He said the settlement "is not meant to put a value on a life and the loss of a loved one. That remains priceless."

Last July, Green's relatives said they planned to file a $25 million lawsuit against the city and the hospital and called for criminal charges against hospital workers.

A hospital security video showed that the mother of six waited in an emergency room chair for nearly 24 hours before she slid to the floor, where she convulsed for more than a half hour and then became still.

An hour after she fell to the floor, the video showed, a hospital employee nudged Green with her foot and summoned help, but the 49-year-old woman was dead

The New York Civil Liberties Union alleges that hospital records were falsified to say that Green was "sitting quietly in the waiting room" at a time when, the video shows, she had been on the floor for 48 minutes and had not moved for more than 10 minutes.

An autopsy revealed that Green died from pulmonary thromboembolism -- blood clots that formed in her legs and eventually made their way into her lungs, according to Ellen Borakove, the medical examiner's spokeswoman. The clots came from deep vein thrombosis, which complicated Green's chronic paranoid schizophrenia, she said.