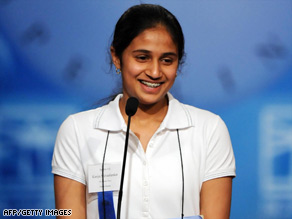 The eighth-grader won $40,000 in cash and prizes for nailing the final word. Pronounced lay-odd-uh-see-an, the word means lukewarm or indifferent, particularly in matters of politics or religion.

This year's bee -- an event that has skyrocketed in popularity, thanks to exposure on television and in movies -- started on Tuesday in Washington with a record 293 spellers.

The competition went 15 rounds. Spellers ranged from 9 to 15 years old. According to the contest's Web site, 117 of the spellers speak languages other than English, and English was not the first language of 33 of the spellers.

The first National Spelling Bee was in 1925 and featured nine contestants.

In an event that has seen contestants visibly crack under the strain of the national spotlight in past years, Shivashankar -- competing in her fourth national finals -- appeared composed throughout.

As she spelled words that included "phoresy," "hydrargyrum" and "huisache," she calmly went through the routine of asking each word's pronunciations, origin and roots before ticking them off for the judges.

Her father, who is her spelling coach, would tap his foot in time as she spelled the words and at one point appeared so confident that he waved to someone while his daughter was in the middle of spelling a word.

Second-place finisher Tim Ruiter of Reston, Virginia, bowed out after misspelling "Maecenas," a generous patron of the arts.

Jill Biden, wife of Vice President Joe Biden, was in the audience to watch the finals, which were nationally televised on ABC.

Shivashankar attends California Trail Junior High School. Her hobbies including swimming, cycling and traditional Indian dance, according to the contest's Web site. She plans to become a neurosurgeon.

All About Spelling Bees • Kansas