After long fight, Vietnam vet gets his due on the Wall

WASHINGTON (CNN) -- Fifteen years after his death, and after his family fought a very long bureaucratic battle with the government, Enrique Valdez's name was added to the Vietnam Veterans Memorial. 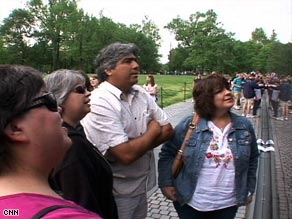 Rick Valdez looks at his father's name on the Wall on Monday.

Valdez was a Marine gunnery sergeant wounded by shrapnel in August 1969, combat that left him a quadriplegic.

Since his death in 1994, his family has been waiting for the Defense Department to answer their requests that Valdez be included on "The Wall."

On Memorial Day, his family finally got their wish, as they watched his name officially added to "The Wall."

His name was added to the registry after the Department of Defense declared he was eligible because he died from his war injuries.

Rick Valdez was 7 when his father was deployed to Vietnam.

"The night he had to go to the bus station for his second tour of duty, that was the last time I saw him walking," the son recalled.

"The next time we saw him was at the Veterans Administration hospital in Long Beach [California], after they shipped him home," he said.

"There are people that are worse off than I was," Tina Valdez recalled his father always saying. "I enlisted, and I served. I knew what I was getting into. And if this is the worst that could happen to me, well then, so be it."

When notification came weeks ago from the Defense Department that Valdez's name would be added to the Wall, there was no explanation with it.

Valdez's family previously thought since he hadn't been killed during war, Enrique Valdez couldn't be on the wall.

Comrades and others told the family that he could be added to "The Wall "as long as we could show that his death was a result of his [war] injuries," said daughter Tina Valdez.

"And when my father passed away, they put it on the death certificate, long before we even knew that this was a possibility."

Now, they couldn't be more thrilled that it's not a possibility anymore -- it's a reality -- though they don't have an explanation for why the Defense Department finally notified them.

"What changed?" his daughter Tina Valdez asked. "I've been sending [the Defense Department] the same information for 14 years. Why all of a sudden is it different now?"

But when she saw the fresh lettering earlier this month on Panel 17, she felt that an explanation didn't matter as much anymore.

Enrique Valdez joins 58,260 other names listed on the Vietnam Veterans Memorial, and his is the only name added this year under 1969, for combat deaths that year or later deaths resulting from injuries sustained in combat that year.

All About Vietnam Veterans Memorial