QUEENS, New York (CNN) -- For Victor Guevares, winning a bid at a raucous foreclosure auction two months ago was just the first step toward achieving his dream of home ownership. And after getting through several obstacles along the way, he finally moved his family into the two-story, three-bedroom house in Queens. 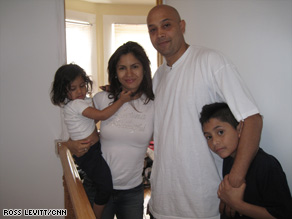 Victor Guevares, second from right, bought a home at a raucous foreclosure auction two months ago.

The auction process isn't as easy as it looks, Guevares said.

"If you're going to an auction, do your research," he told CNN.

CNN first met the Guevares family in March when he grabbed a home once worth $527,000 for less than half that price.

Guevares had won an auction at USHomeAuction.com's foreclosure sale in New York. Banks and other lenders were unloading foreclosed houses, and many were selling at 50 percent to 60 percent below their highest values.

Foreclosures skyrocketed in March and the first quarter of 2009 to their highest levels on record as banks lifted moratoria on filings. Foreclosure filings -- which include default papers, auction sale notices and repossessions -- reached 803,489 in the first quarter, according to a recent report by RealtyTrac, an online marketer of foreclosed properties.

Watch Victor Guevares give a quick tour of his new home »

Sitting with his stomach in knots on that March 8 afternoon, Guevares made the opening bid and kept pace until they passed $100,000, then $200,000.

Looking shell-shocked, Guevares ended up with the winning bid: $230,000.

But he soon realized there was much more to it, after plunking down $7,000 in auction fees and another $5,000 required from every bidder.

And still, he couldn't immediately lock in a mortgage at the auction as he had hoped because records showed the home faced a possible code violation.

"I had a problem," Guevares said.

An inspection cleared that hurdle, and closing day ended happily with Guevares holding the deed to his first house.

But he wasn't through yet.

Guevares, a married father of two, wanted to have his family moved in by the end of May -- and had his work cut out, since the home was split into two apartments.

He broke down a wall, opened up a staircase, put in new floors, repainted and created a sunroom.

Guevares spent the past 12 years renting and trying to save for his first home, and believes he came out ahead with the auction win.

Guevares' son, 8-year-old Devin, is reveling in his bright green room that has a window to peek out into his yard -- and the neighbor's.

"They have a dog named Rocky, just the same as the dog we have," he said.

Another perk: no more worrying about being quiet as he did at their apartment. "I can just scream," said Devin.