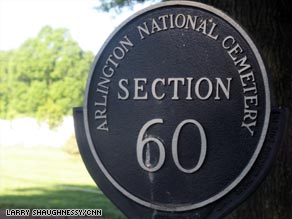 Arlington's Section 60 is the final resting place for many casualties of the wars in Iraq and Afghanistan.

Her husband, Staff Sgt. Leroy Alexander, was half a world away fighting with the Special Forces in Afghanistan, but he had found a way to send a floral arrangement to his wife, who was five months pregnant with twins.

"He called me and asked me what building I worked in. He said he had to update some records," Alexander said. The flowers lifted her spirits.

But a few hours later, her emotions would be thrown into a tailspin. Alexander saw two Army officers in dress uniforms knock on her front door.

One of the officers started to talk: "We regret to inform you..."

If he said any more, Alexander doesn't remember. "The next memory I have is in my kitchen, banging on the floor. I just couldn't believe it," she said.

The good feelings from flowers delivered a few hours before were gone, replaced by shock, pain and mourning.

A roadside bomb had made her a widow.

Staff Sgt. Alexander now lies in Arlington National Cemetery's Section 60, where 500 soldiers, Marines, airmen and sailors who have died in Iraq and Afghanistan are buried.

For years Section 60 has been the one of busiest parts of the cemetery. Every day new burials bring precision marches, the somber tones of taps and the nerve-rattling three-gun salutes.

Watch how widows connect at Section 60 »

Then there are family and friends who come to the graves to make an emotional connection to their lost loved ones.

Memorial Day weekend brings even more activity and more visitors. Adults, even some uniformed generals, walk slowly between the rows and rows of headstones, looking for a familiar name. But small children often seem to find the cemetery a place to explore, even play. Their smiles and curiosity remind grown-ups that even in a place synonymous with death, life goes on.

A sense of community has emerged in Section 60.

"I've come here at times and I've met people who were paying remembrances to their loved ones. You become friendly," Capt. Alexander said. "You see each other sometimes and you make a friendship because you know that your loved ones died for the same cause."

"Other widows will come by and put something on there for me if they don't see me. They'll put down flowers. It's kind of a community," Capra said.

More than flowers adorn the graves in Section 60. Visitors of all faiths have picked up the ancient Jewish tradition of leaving a small stone on the headstones to show that a visitor had been to the grave. In most cases these are pebbles found near the grave. But some people have taken to leaving colored glass beads or elaborately painted stones with shamrocks or words like "hero."

Capra recently found a small Yoda figure on her husband's grave. She doesn't know who left it, but it must have been a friend, because her husband loved "Star Wars."

"We never know who puts stuff" on the headstone, she said.

Some mementos leave one to wonder about the story behind them. Like the headstone topped by a tiny bottle of Tabasco hot sauce. Or a set of dog tags with a name that didn't match the name on the headstone.

Watch how friends say goodbye to a fallen soldier »

There is another topped by a small Lego toy, perhaps left by a child whose father died in a far-off land before they even knew each other. Or the grave adorned with an empty bottle of Bud Light, a rubber duck and a candle.

Nearby an empty Wild Turkey bottle is the lone addition to the grave of a soldier who died in a country where drinking alcohol is strictly forbidden.

Capra has found a variety of items on Tony's headstone.

"Coins, lots of rocks, candy. My husband was a candy freak," Capra said. "There was a cross. A little necklace, Mardi Gras beads during Mardi Gras season. Anything they have they'll put on top to show that they are thinking about them at the time."

Alexander seems to draw strength from the items she finds.

"Someone came and did a picture of Lee, and it was a hand-drawn picture. I thought that was very interesting," she said.

"People who haven't been seen in years will leave a note of some sort. It's nice to know that you've been remembered after all of this time. To know that we have friends who still love and support us, that is just wonderful."

Section 60 has been called the "saddest acre in America," and without a doubt sadness abounds. But so do comfort, support and even an occasional smile.