(CNN) -- The U.S. Air Force Academy is mourning its first female graduate to be killed by enemy forces in Afghanistan or Iraq. 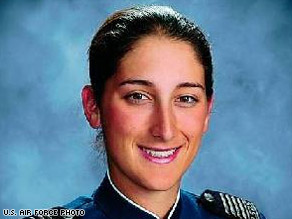 She was an intelligence, surveillance and reconnaissance operations officer assigned to the 613th Air and Space Operations Center, the Air Force said Friday in a news release.

Schulte was deployed to Combined Security Transition Command-Afghanistan. She was traveling in a convoy to Bagram Airfield to participate in an intelligence sharing conference.

"Losing Lt. Schulte has been a tragedy felt by everyone here and across the Air Force," said Col. Terrence O'Shaughnessy, 613th AOC commander. "Our deepest sympathies and prayers are with the family of this heroic airman."

Schulte's fellow airmen "will be forever proud of her," he added.

Schulte graduated from the academy in 2006. She is the 10th graduate to die in the wars in Iraq and Afghanistan, the academy said.

Schulte's parents live in St. Louis, Missouri. She also had a brother.

Her father told the St. Louis Post-Dispatch that his daughter was a natural leader who was teaching Afghan forces how to handle military intelligence.

"She knew how to talk to chiefs of staff, to generals, to privates, and they listened," Robert Schulte told the paper. "And that's what we needed, a great leader of people."