(CNN) -- A wheel from the main landing gear of a Colgan Airlines passenger plane fell off and rolled away as the aircraft was landing in Buffalo, New York, earlier this week. 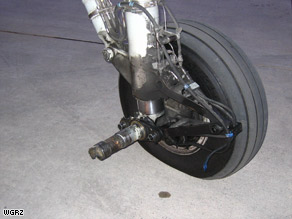 A wheel fell off the landing gear of Q400 Bombardier upon landing on Colgan Flight 3268 earlier this week.

On Thursday night, The Toronto Sun posted a video of the incident shot by a passenger on the Q400 Bombardier -- the same type of plane involved in a fatal Colgan Airlines crash three months ago, also on approach to Buffalo Niagara International Airport.

The video shows the wheel touch down on the ground and then roll away, followed by metal parts that are meant to keep the wheels in place.

The plane was towed to the gate, where everyone on board "deplaned normally," said Joe Williams, a spokesman for Pinnacle Airlines, Colgan's parent company.

"At no time was any passenger or crew member at risk, nor were any injuries reported," Williams said of the Tuesday incident. "The aircraft was properly maintained in accordance with the manufacturer and Federal Aviation Administration procedures."

Williams said the incident "appears to have been caused by the failure of the outer wheel bearing ... the bearing was relatively new, having been on the aircraft for five weeks."

"I was scared, and the other passengers looked worried, too," one passenger told the Toronto newspaper. "For a moment, I thought the worst in that we may not make it."

Three months ago, Colgan Air Flight 3407 crashed in nearby Clarence Center, New York, killing all 49 passengers and crew members aboard. One person was killed on the ground.

Hearings about the cause of that accident have been held in Washington this week. Investigators have focused on pilot fatigue as a possible cause of the crash.