Refugees 'had to flee their homes with very little'

(CNN) -- As president of the International Rescue Committee, George Rupp oversees his organization's work to resettle thousands of refugees in the United States in addition to its relief and rehabilitation operations in 25 countries. 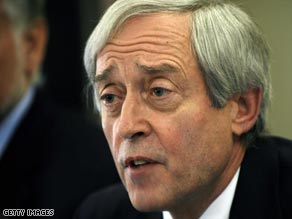 In these excerpts from an interview with CNN's Joe Sterling, Rupp talks about how the economic recession affects refugees who have been resettled by the U.S. government in the United States. Rupp also discusses changes that, in his view, would strengthen the U.S. program that resettles refugees.

Joe Sterling: What's the biggest misconception Americans have about refugees?

George Rupp: I think the biggest confusion or misconception is simply to put in the same pot refugees and immigrants. Whereas most immigrants are coming here for economic reasons, refugees are coming here because they had to flee their homes with very little because of persecution and conflict.

Sterling: Compare the situation now and before the recession for refugees.

The single largest challenge or problem for refugees is the difficulty in this labor market and this economic climate to find jobs.

Sterling: How are the refugees adjusting to the economic downturn?

Rupp: I think the refugees themselves are extremely stressed. Psychologically, I guess that means they are depressed, but in terms of just survivability, they're stressed because many of them ... either are single parents with children or couples with children. And if they can't find employment, then they have a great deal of difficulty being able to afford the housing they have or food or any other needs.

They feel as if they have looked forward with great anticipation to coming to the United States. Now they are here and they feel completely unable to support themselves.

Sterling: What kinds of strategies are being used by job developers and others on the frontlines to help refugees?

Rupp: Historically, refugees have distinguished themselves by being willing and able to take any position that's offered to them. Very often they begin in the hospitality industry, where they are either doing janitorial services or maid services or other relatively unskilled employment.

Sterling: Are all of the refugees populations reacting the same way to the recession?

Rupp: I think there are differences. It depends in part on the level of professional employment they were accustomed to before coming to the United States. The refugees from Iraq in particular have tended to be professionally employed before coming. For them, it is exceedingly difficult to face the prospect that they will be employed in positions that they would have considered demeaning back home.

The problem is even if they once get over that hurdle and decide they will accept any job they are offered, even those jobs that they would consider to be demeaning are unavailable to them. The result is frustration on the part of all refugees.

I think also on the part of refugees from Iraq, a level of anger and even betrayal, because they had imagined when they got to the United States all their insecurities and other problems would be solved quickly. And they now have to face up to the fact that that's not happening.

Rupp: Certainly some of the refugees feel there is bigotry encountered and it is very difficult to confirm whether that is or isn't the case. But several reported they have been told by several prospective employers, that, "You are from Iraq, you are rich, there's no reason we have to worry about finding a position for you."

Rupp: Because of the oil resources that these few employers were aware that Iraq has. There's no question that refugees of all ethnicities often feel they have a special burden, a special hurdle to get over. But what is remarkable is how many of them feel the U.S. is welcoming, and is open, and does not discriminate against them. It's not surprising there are at least some instances in which people feel they were discriminated against and no doubt they were, but that is not a dominant pattern I don't think.

I was in Los Angeles recently. There are very large numbers of refugees from Iran who are settled in L.A. They all came as family reunification cases. All of the problems that I have been describing don't apply to them. They were immediately plugged into family networks, communities support them until they can find work and so on. When there are family reunification cases, whether it's in L.A. and other places, it's not as big a problem. Similarly ... Iraqis who go to Detroit and other areas where there are concentrations of Iraqis, they have an easier time.

But the largest fraction of the refugees now being resettled by the State Department are free cases who have no family connections in this country and that is by far the biggest challenge. Whereas they are used to being in extended families, when they then risk being evicted from their homes because they can't find jobs and can't pay the rent, they feel completely exposed and at a loss.

Sterling: Any particular groups come to mind when you think of the free cases?

Rupp: That is across the board now. The largest population of refugees that are being admitted right now by the State Department are Iraqis, and the vast majority of those are free cases.

Sterling: Many Arab-American communities are in Rust Belt areas where there are no jobs. Wouldn't it be more advantageous to steer them to other communities?

Rupp: Frankly, that's one of the reasons the State Department is not just shipping all refugees to the Detroit area. Right now, Detroit will have a hard time of serving anything approaching the level of population that might like to be where there are other Iraqi refugees. The employment situation, however bad we think it is in Georgia or even in Arizona, where it is bad ... is not as bad as the larger Detroit area, given what's happening in the automotive industry.

Sterling: There was a meeting in March of several resettlement agencies. They came out with a joint statement calling for reform of the refugee law. What do you think the government and lawmakers should be doing?

Rupp: Basically, the problem of Iraqi refugees in this economic climate only highlights the deficiencies in the overall organization and structure of resettling refugees in this country. Over the last 30 years, the funding for the refugee resettlement programs has dramatically declined in terms of any correlation with the cost of living. It is completely inadequate funding. It works only if refugees can find work virtually immediately.

What we need to do is to revisit the whole way in which the refugee resettlement process is funded and bring it back to the levels it was in the '70s, when we were resettling Vietnamese refugees. It was very substantially better funded than it is now.

Sterling: Tell me about allies in Washington. Are there folks in Congress and the administration who are focused in on this kind of reform?

Rupp: I would say there are, but it doesn't have nearly as powerful and consistent a level of advocacy as we'd like. Sen. [Edward] Kennedy has been a stalwart supporter of doing a better job in resettling refugees. The Obama administration in principle acknowledges the problem and wants to do more. At the moment, the Obama administration hasn't made the crucial appointments. Key positions have not been filled. All signals are the Obama administration takes this seriously, but at this point it's too early to say because they don't have the appropriate people in place.

Sterling: Many Vietnamese who came here helped Americans during the war there. Many Iraqis who came here did the same thing. There seems to be a lot more sympathy toward Vietnamese back then. Am I wrong?

Rupp: I think your sense is correct that there is less sympathy now for Iraqi refugees coming in than there was for Vietnamese refugees. ... I think that has to do in part with the fact that the war in Iraq has from the very beginning elicited much opposition and relatively little sympathy. By the end of the Vietnam War, there was obviously considerable opposition to it. But there wasn't the kind of bitter opposition that was engendered by the Iraq invasion.

Sterling: Do you think it might have anything to do with the fact that many Vietnamese were Catholic and many of these Iraqis are Muslims?

Rupp: It may well be a dimension of the problem or the issue. There may be that kind of identification especially when refugee resettlement was done through the Catholic Church, there was an identification with those. I wouldn't rule that out.

It also may be, if we're candid about it, [that] our hindsight of 35 years may not be completely accurate. There were tensions also when the Vietnamese came in. A couple of refugees ... said to us they'd been told by employers, "Iraq is rich and it's got lots of oil. Your people should be able to take care of yourselves." No one thought Vietnam was rich. So that wasn't a similar kind of issue.

Over time, everyone has seen how successful most of those Vietnamese refugees have been and how much they've contributed to our society. Now we feel as if we've always welcomed them. That may not be quite as true as it feels in retrospect. My guess is 35 years from now when we look back and we see how much Iraqi refugees have contributed to this country, we'll feel we were supportive of them when they came too.

Sterling: What do you say to Americans who wonder why should the government help refugees if Americans are out of work?

Rupp: It's a very difficult question to answer, and it's not as if anyone could responsibly argue that refugees should be given preference over Americans who are hurting and are unemployed. The difficulty the refugee poses is that we have brought people to this country. Often they've waited eight or 10 years, and they come here having lost everything when they fled their homelands.

All they need is a handout for a little longer than the couple of months they have now. The record on refugees is that they will very quickly be able to take care of themselves. Also, that they are willing to do work that the vast majority of Americans are not interested in or even willing to do. It's not a matter of taking positions away from Americans or from positions Americans are lining up to fill.

But, rather, having the most entry level, menial positions that will allow refugees to get their feet on the first rung of the American economic ladder. ... [I] completely concede that should not be done at the cost of other Americans, but I think there are ways to make it possible for us to welcome and absorb refugees that will not lead to taking jobs away from Americans.