WASHINGTON (CNN) -- A man who spearheaded financial investigations of Iran said Wednesday the Islamic republic is "deadly serious" about developing nuclear weapons and long-range missiles -- and there's not much time to stop it before it does. 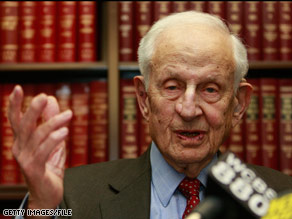 New York District Attorney Robert Morgenthau told a Senate Foreign Relations Committee hearing that although he's not an expert on proliferation, many such experts were consulted in the financial probes "and it comes out loud and clear: It is late in this game and we don't have a lot of time to stop Iran from developing long-range missiles and nuclear weapons."

Morgenthau helped uncover a multibillion-dollar scam that Iran used to move money through U.S. financial institutions to help buy materials for its nuclear and missile programs. In January, a large British bank agreed to pay $350 million in fines after it was accused of helping Iran hide the transactions.

"The Iranians are deadly serious about proceeding with this program and ... it is later than a lot of people think. And frankly some of the people we have consulted are shocked by the sophistication of the equipment they are buying. So we don't have a lot of time to waste," he told committee members in a hearing entitled, "Engaging Iran: Obstacles and Opportunities."

Foreign Relations Committee Chairman Sen. John Kerry, D-Massachusetts, said he wanted to explore how to engage with Iran and prevent it from becoming a nuclear-armed nation.

"This is the time to reaffirm our commitment to giving meaningful negotiations with Iran's leaders a chance -- not simply fall back on the stale rhetoric and failed strategies of the previous years," he said in his opening statement.

Kerry called sanctions a blunt instrument with an imperfect track record. He said such measures may have slowed, but did not prevent, Iran's nuclear program as the country moved forward with enrichment of uranium on an industrial scale.

The committee is poised to release a new report on Iran's nuclear program this week, said Kerry.

Nicholas Burns, former undersecretary of state for political affairs, also testified at the hearing. He said he feared the United States and Iran were on a collision course. The countries have had no diplomatic relationship since the Carter administration.

"I do see the Iranians as a real threat to our country. There is no question they are seeking a nuclear weapons capability. No one doubts that," Burns told senators. "They are the principal funder of most of the Middle East terrorist groups that are shooting at us, shooting at the Israelis and the moderate Palestinians. And they are influential in Iraq and Afghanistan and sometimes in ways that are very negative to U.S. interests."

Burns, who is now a professor at Harvard's Kennedy School, said past policies toward Iran failed and he favored an approach of engagement backed by threats of sanctions and military force.

"We've got to negotiate from a position of strength. We can't go hat in hand to these negotiations and think by just talking we are going to make progress," Burns said.

Any negotiations with Tehran must have a strict timetable and include a previous agreement with both Russia and China for harsh sanctions if the talks fail, Burns said. And they should be backed up by the possibility of military action, he added.

"Since 9/11 we often have led with the military. At least in the case of Afghanistan that was appropriate. Sometimes it is better to lead with diplomacy, with the military in reserve. I think this is one of those times."