MIAMI, Florida (CNN) -- An internationally known Catholic priest sometimes called "Father Oprah" has been removed from his posts in Florida after published photos showed him lying down bare-chested in an embrace with a woman on a beach. 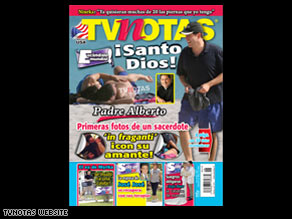 The photos of the Cuban-American priest appeared on the cover of this week's TV Notas magazine.

The Rev. Alberto Cutie (pronounced koo-tee-AYE) -- who got the nickname "Father Oprah" because of the advice he gives on Spanish-language media -- remains a priest. But he was relieved Tuesday of his duties at St. Francis De Sales Church in Miami Beach, Florida, and at the Radio Paz and Radio Peace networks, said a "deeply saddened" Miami, Florida, Archbishop John C. Favalora.

The photos of the Cuban-American priest appeared on the cover and on eight inside pages of this week's TV Notas magazine. The cover says in Spanish: "Good God. Padre Alberto. First photos of a priest 'in flagrante' with his lover."

In a message posted on the Miami archdiocese Web page, the archbishop apologized to parishioners and radio listeners for what he called a "scandal."

Cutie apologized in an online statement Tuesday, saying he "wants to ask for forgiveness if my actions have caused pain and sadness. ... I assure you that my service and dedication to God remain intact."

Other media outlets throughout Latin America, including the official Notimex news agency in Mexico, picked up the story on Tuesday, and it became an Internet sensation. Cutie has millions of followers in the Spanish-speaking world.

"We got a bunch of calls from sobbing women," said Miami archdiocese spokeswoman Mary Ross Agosta.

Archdiocese officials declined to say where Cutie was Tuesday or what his new assignment might be.

A woman who answered the telephone Wednesday at St. Francis De Sales said, "He is no longer here."

The identity of the woman in the photos remained publicly unknown Wednesday.

Cutie was ordained in May 1995 and was the first Catholic priest to host a daily talk show on a major secular television network, his information on the LinkedIn online professional network says.

He was president and general director of Pax Catholic Communications, home of Radio Paz and Radio Peace in Miami.

CNN's John Zarrella and Arthur Brice contributed to this report.