WASHINGTON (CNN) -- Safety advocates are fighting efforts to allow tractor-trailers to carry heavier loads on highways, saying the trucks are already too dangerous. But at least one group says adding an axle would improve safety margins so such loads can be carried. 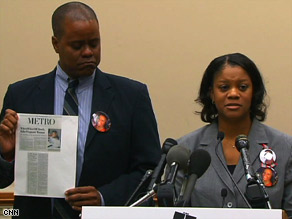 Mark and Tracy Quinichett, whose daughter was killed in a wreck, speak Monday against raising trucks' load limits.

"It is a public health crisis," policy activist Joan Claybrook said Monday, announcing a petition drive to fight larger loads that could be authorized as part of a transportation bill moving through Congress.

At a Monday news conference, Claybrook -- who chaired the National Highway Transportation Administration during the Carter administration -- and her Truck Safety Coalition presented several families who have lost a loved one to a highway accident involving commercial trucks.

A new Web site from the coalition, StopBiggerTrucks.org, provides statistics the group believes will persuade people to pressure lawmakers to leave truck limits as they stand.

But an industry group, the Coalition for Transportation Productivity, hopes lawmakers will approve a proposal to add an axle to today's big rigs -- an action it says will allow higher load limits and lead to safer roads.

Adding an axle would give big rigs 22 wheels, up from the current 18.

Without the change, "more trucks will have to take to the road" to handle rising cargo demand, said John Runyan, co-chairman of the truck cargo industry group.

Runyan was at the back of the room during the other group's news conference, where families gave tearful accounts of losing loved ones in truck wrecks.

One of those couples, Mark and Tracy Quinichett, lost their 21-year-old daughter a few months ago when a truck's wheel flew off and crashed through the windshield of her car on the Capital Beltway outside Washington.

"The larger the trucks -- it's just so much more dangerous. And if they are allowed to make these trucks larger, it's going to be a real, real problem, even more than it is right now," Mark Quinichett said.

Runyan told CNN that going from 18 wheels to 22 wheels would allow for the safe transportation of heavier loads because the weight would be more evenly distributed.