Survey: Support for terror suspect torture differs among the faithful

WASHINGTON (CNN) -- The more often Americans go to church, the more likely they are to support the torture of suspected terrorists, according to a new survey. 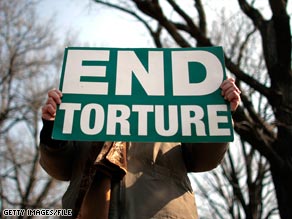 The Washington Region Religious Campaign Against Torture rallied on Capitol Hill in March 2008.

More than half of people who attend services at least once a week -- 54 percent -- said the use of torture against suspected terrorists is "often" or "sometimes" justified. Only 42 percent of people who "seldom or never" go to services agreed, according to the analysis released Wednesday by the Pew Forum on Religion & Public Life.

White evangelical Protestants were the religious group most likely to say torture is often or sometimes justified -- more than six in 10 supported it. People unaffiliated with any religious organization were least likely to back it. Only four in 10 of them did.

The analysis is based on a Pew Research Center survey of 742 American adults conducted April 14-21. It did not include analysis of groups other than white evangelicals, white non-Hispanic Catholics, white mainline Protestants and the religiously unaffiliated, because the sample size was too small.

See results of the survey »

The president of the National Association of Evangelicals, Leith Anderson, did not immediately respond to a request for comment.

Roughly half of all respondents -- 49 percent -- said it is often or sometimes justified. A quarter said it never is.

The religious group most likely to say torture is never justified was Protestant denominations -- such as Episcopalians, Lutherans and Presbyterians -- categorized as "mainline" Protestants, in contrast to evangelicals. Just over three in 10 of them said torture is never justified. A quarter of the religiously unaffiliated said the same, compared with two in 10 white non-Hispanic Catholics and one in eight evangelicals.