'Hand of God' rock being sold on eBay

(CNN) -- A man in northern Idaho says he has seen a massive hand of God in his life, and he is willing to share it with the highest bidder. 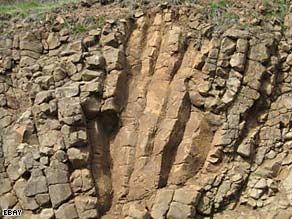 Paul Grayhek says the "Hand of God" appeared in his backyard in March.

Paul Grayhek, 52, listed the rock formation he dubbed the "Hand of God Rock Wall" on the online auction Web site eBay. The highest bid was $250 early Sunday, with three days left to go in the auction.

The hand-like formation, approximately 9 feet tall and 4 feet wide, appeared in Grayhek's backyard after a rockfall during Lent on March 8, he said.

The Coeur d'Alene resident said he faced tough times after losing his job, and believed the rock was a sign.

"I prayed between licking my wounds and looking for a job," he said. "We rarely get rockfalls and this formation is 20 feet from my house. It's definitely a symbol of the hand of God in my life."

However, the winning bidder on eBay should not start clearing out his backyard. Grayhek is not planning to part with the formation.

The buyer will "basically be buying the rights, complete and exclusive rights" to the rock, including literary and movie rights, according to Grayhek.

Grayhek said he plans to use the money from the sale to pursue an unpaid internship in counseling when he graduates with a master's degree in social work in two years.

"People think I'm some holier-than-thou person trying to get rich. I'm not," Grayhek said. "The purpose is to spread the story of God and eBay is just a vehicle."

All About eBay Inc.