(CNN) -- The captain of a polo team at the center of the mysterious deaths of 21 horses told an Argentine newspaper that he has "no doubts" vitamins administered to the animals by a laboratory are at fault. 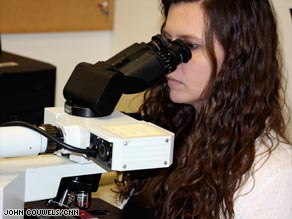 A researcher at the University of Florida continues tests of the dead horses' blood on Wednesday.

"For us, we are suspecting that something on the laboratory's part went wrong. We have no doubts of the origin of the problem," Juan Martín Nero, top player for the Lechuza Caracas polo team, told the newspaper La Nacion. The Venezuela-based team trained the horses.

For Nero, the vitamins -- either the dosages or the possibility of them being tainted -- are the obvious culprit.

"There were five horses that did not get the vitamin and those were the only ones that survived," he told the Argentine newspaper.

The deaths of the ponies, witnessed in full view by spectators Sunday in a dramatic scene where horses collapsed one after another, have jolted the prestigious polo tournament at the marquee International Polo Club Palm Beach in Wellington, Florida.

A memorial ceremony for the 21 horses is scheduled for Thursday at the U.S. Open Polo Championship, where officials hope to resume play after matches were postponed by rain Wednesday. The memorial service will include a brief speech and a wreath-laying on the field.

As various state agencies investigate the case, law enforcement officials have opened a criminal investigation to verify that nothing illegal occurred Sunday in South Florida. The investigation is being coordinated by the state's veterinarian, Tom Holt.

Necropsies were also being performed by the state Animal Disease Diagnostic Lab in Kissimmee, Florida.

The U.S. Polo Association released a statement late Wednesday saying the organization "wants to get to the bottom of this tragedy and determine what happened to the horses in this isolated and unprecedented event."

While investigators involved in the case initially focused on feed and contagious disease, Nero's comments have brought scrutiny on the vitamins the animals were given before Sunday's match.

Nero told the Buenos Aires newspaper that while the team gives the vitamins to the horses the day of the match for energy, the dosage is always prepared by a laboratory. He said the vitamin is Biodyl.

"Yes. It's what is given to them always."

Biodyl is manufactured by Merial, a company jointly owned by pharmaceutical giants Merck and Sanofi-Aventis.

Merial's world headquarters are in Duluth, Georgia. Headquarters for Europe, the Middle East and Africa are in Lyon, France.

Reports have indicated that the Biodyl used in the polo match may have been from France.

A Merial spokesman, in a phone interview Wednesday evening with CNN, said no agencies involved in the investigation have contacted them about the horse deaths.

"I can tell you that we have no confirmation that our product was even used in the case, so we're waiting for results of the tests, like everyone else," said Steve Dickinson, head of global corporate communications for Merial.

Dickinson said that although Biodyl is not FDA-approved, "we're confident that Merial's Biodyl is safe when used as directed. It has been around from the 1950s and adverse reactions have been exceedingly rare over many years of tracking. Less than one animal in over 2 million doses."

According to Saadat International, a Merial importer, Biodyl is designed to be used for treatment of muscle disorders in animals, to combat fatigue, certain sicknesses and to help them recover.

A fact sheet on the drug says it is also used to help condition racehorses. Harvey said Biodyl is a brand of a combination of vitamins and that the labs where the necropsies were performed would not necessarily detect it.

According to Saadat's Web site, Biodyl contains vitamins B12, sodium selenite, potassium aspartate semihydrate, magnesium aspartate tetrahydrate and excipient, an inert substance used as a carrier for other substances.

Merial's Web site said the company provides "a comprehensive range of products to enhance the health, well-being and performance of a wide range of animals."

Harvey said Biodyl should not have killed the horses, if administered correctly. He said if someone cut corners trying to save money and compounded or tried to make their own version of the supplement, then it is possible an incorrect mixture could cause fatalities in the horses.