Old postcard a mystery in the mail 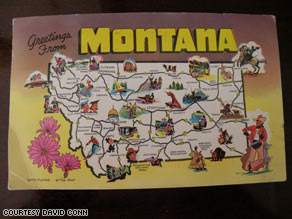 The card said Fran and Polly were enjoying their cross-country train ride and had fed deer somewhere along the way.

That was all nice, and a little curious for several reasons: One, Conn didn't know anyone named Fran or Polly; two, the card was addressed to a different name at his P.O. box; and three, it had been mailed in 1962.

"This card looks like somebody just bought it at the drugstore," Conn told CNN. "It's not even yellowed. It looks spankin' new."

The card was addressed to Marion White, who was editor of Hudson's North Summit Times newspaper and once held the post office box Conn now uses. She later served for more than 20 years on the Hudson Village Council. She died in 1988.

A few days after receiving the card, Conn talked to White's relatives and others, who told him the sender had to be Fran Murphey. Murphey was an iconic Akron Beacon Journal reporter who lived her whole life in the same house near Hudson. She died in 1998.

Murphey's life was an eccentric mixture of the mundane and the extraordinary.

In her 55 years with the Beacon Journal, she became a local celebrity. She was well-known for, among other things, her preference for bib overalls, her love of travel, her sometimes salty language, her expertise on outhouses and her vast collection of postcards -- a quarter of a million of them, according to her niece Barbara Joy Godar.

Murphey's dispatch from Montana chronicled a trip she took with friend and colleague Polly Paffilas, who died in 2005. It bore a 3-cent stamp, the postcard rate in 1962, and was hand-canceled twice on July 5, 1962, with a Smokey Bear indicia at the Helena, Montana, post office.

Mail sometimes falls behind machinery or is left in a discarded mail bag and languishes for years at a time, but there's no telling where Murphey's card spent the past 47 years, said Mark Saunders, a spokesman for the U.S. Postal Service in Washington.

Victor Dubina, a postal service spokesman for northern and central Ohio, declined to surmise what happened to Murphey's card.

"Anything I'd guess would be sheer speculation," he said. "Over the course of the years we've seen little things like this pop up, and it's never the same."

It's unlikely the card was lost in the mail since 1962, two antiques dealers said Wednesday. A penciled notation near the stamp indicates the card was sold for $1 at booth "#32" in an antique shop somewhere, said Howard Diefenbach, who owns an antique shop in Bay City, Michigan, and Grant Winchell, who sells postcards through Diefenbach's shop.

"It's common practice for most dealers make a mark in pencil on a card to indicate the price and which booth it's from," Diefenbach said.

Dealers make the mark in pencil so the buyer can erase it without compromising the value of the card, said Winchell, who happens to hold booth number 32 in the shop but doesn't claim any relationship to Murphey's card. The $1 price would be appropriate for that type of card in today's market, he added.

Conn isn't sure what he'll do with the card. He may frame it and hang it on his wall. He's also considering donating it to Hudson's historical society or giving it to the Beacon Journal to display.

Whatever route the card took, it makes for an interesting artifact, Dubina said.

"This is a lost art," he said. "Anymore, you either send an e-mail or send a tweet: 'I'm on the edge of the Grand Canyon.'

See the postcards that iReporters treasure »

"Bless Fran's heart, she wrote postcards. We just don't see that much of it anymore," Dubina said. "Thirty years from now, 40 years from now, who's going to say, 'Ooh, I just got an e-mail from Victor'? 'How did I get it? What happened?'"

It's something special for loved ones, too, Saunders added.

"That piece of tangible postcard, that 'Greetings from Montana,' that's almost a piece of that individual that extends beyond their life," Saunders said.

Murphey built her postcard collection in part by mailing cards to friends while traveling and then asking for them back when she returned, Conn said.

"I can just picture her finally getting back from her trip, saying, 'OK, hey, Marion, where's that card I sent you from Montana?' and [White] said, 'I never got that card from Montana,' and [Murphey] was probably thinking, 'That's part of my collection! Where's the card?'" Conn said. "And here it is 47 years later, and it appears."

In her lengthy 1998 obituary in the Beacon Journal, colleagues recounted having to wait in the hallway outside Murphey's hospice room while she made phone calls for one final story.

"When she gets to heaven, I wouldn't be surprised if Fran finds some way to send news from the beyond," former Beacon Journal books editor Betsy Lammerding said in the obituary.