LOS ANGELES, California -- On Earth Day on Wednesday, Dr. David Jentsch marched at the head of a column of UCLA students and faculty members to the chant of, "Stand up for science!" Across the street a smaller but equally vocal group of animal rights advocates chanted, "U-C-L-A, how many animals have you killed today!" 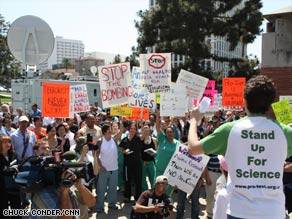 Until recently, Jentsch had never dreamed he would lead a political demonstration. But Jentsch's life took a sharp turn last month when his car was firebombed in his driveway. A radical group of animal rights activists claimed responsibility for the act.

"This is terror," Jentsch said. "There is no two ways about it. It's extremism. It's an attempt to intimidate."

It was the latest in a string of arson attacks against UCLA researchers who use animals in medical research projects. Since 2006, there have been seven attacks aimed at researcher's homes or cars. No arrests have been made in the cases, which are being investigated by an FBI lead task force on terrorism.

"We believe it's just a matter of time before someone is going to be hurt," said FBI Assistant Director in Charge Salvador Hernandez. "The intent of these groups is to intimidate and coerce."

Hernandez heads up the task force investigating the series of attacks and says their actions qualify as terrorist attacks.

"There has never been one human being in this country being killed or even hurt," he said.

He believes the university researchers are the bad guys. "What I do condemn is what goes on behind those walls," he says.

"The reason these people are doing it is because they have been pushed ... nobody is listening ... over a hundred million animals a year are killed in universities and major hospitals in this country," he said.

Jentsch's own research involves studies aimed at treating drug addiction in humans. He studies the brains of monkeys that have been injected with methamphetamine. He says his experiments are peer-reviewed and adhere strictly to established rules for the treatment of lab animals.

Jentsch says that he hopes that this week's dueling demonstrations can lead to a dialogue. He believes many of the protestors voicing opposition to the UCLA labs do not endorse the string of violent acts aimed against him and other researchers, "but it is essential for them to repudiate this type of activity."

In the meantime, Jentsch says he refuses to be intimidated.

"I'm going to continue to live where I live, continue to educate people about my work," he said. "I'm not going to stop."