WASHINGTON (CNN) -- Thousands of confidential files on the U.S. military's most technologically advanced fighter aircraft have been compromised by unknown computer hackers over the past two years, according to senior defense officials. 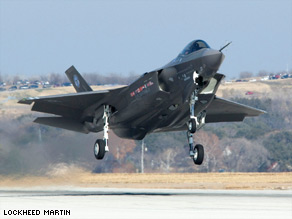 The Internet intruders were able to gain access to data related to the design and electronics systems of the Joint Strike Fighter through computers of Pentagon contractors in charge of designing and building the aircraft, according to the officials, who did not want to be identified because of the sensitivity of the issue.

In addition to files relating to the aircraft, hackers gained entry into the Air Force's air traffic control systems, according to the officials. Once they got in, the Internet hackers were able to see such information as the locations of U.S. military aircraft in flight.

The Joint Striker Fighter plane is the military's new F-35 Lightning II. It designed to become the aircraft used by all of the branches of service.

Most of the files broken into focused on the design and performance statistics of the fighter, as well as its electronic systems, officials said. The information could be used to make the plane easier to fight or defend against.

Additionally, the system used by the aircraft to conduct self-diagnostics during flight was compromised by the computer intrusions, according to the officials.

However, the officials insisted that none of the information accessed was highly sensitive data.

The plane uses stealth and other highly sensitive electronic equipment, but it does not appear that information on those systems was compromised, because it is stored on computers that are not connected to the Internet, according to the defense officials.

Lockheed Martin's chief financial officer denied that there was any breach of classified information, which was first reported by the Wall Street Journal on Tuesday.

"The U.S. government doesn't talk a whole lot about this, and neither do we. But in response to the [Wall Street Journal] report, we think it's incorrect," said Bruce Tanner of Lockheed Martin. "There's never been any effective attack. We have measures in place, and there's never been a successful attack."

In a statement released later, the company reiterated its position that no classified information had been accessed.

"To our knowledge, there has never been any classified information breach. Like the government, we have attacks on our systems continually and have stringent measures in place to detect and stop attacks," the statement said.

Representatives of BAE Systems and Northrop Grumman would not comment on the story and referred all questions to Lockheed Martin.

Different variations of the Joint Strike Fighter will be produced for the different branches of service it will be used in. Many international partners are helping build the plane, and it will be sold to U.S.-allied countries.

The involvement of multiple nations raises concern about the level of computer security measures the partner countries have, officials said.

Companies contracting with the Department of Defense now have to prove that they are using the proper computer security before a contract can be awarded, Pentagon officials said. That measure was put into place within the past year because of the increase in cyber intrusions, they said.

Asked whether sensitive technology for the Joint Strike Fighter had been jeopardized, Pentagon spokesman Bryan Whitman said, "I am not aware of any specific concerns."

Whitman would not confirm the cyber-security breach on the Joint Strike Fighter program but said the number of attempted attacks on the U.S. military's network has been on the rise.

"We have seen the number of intrusion attempts more than double recently," he said. He would not reveal a timeline.

He said the computer systems of the Department of Defense are scanned thousands of times a day by entities looking for ways inside U.S. military computer networks.

Officials could not say who was behind the computer hacking, which has occurred numerous times since 2007. The intruders were able to cover their tracks, making it look like the virtual break-ins were coming from various parts of the world, according to officials.

The report noted that U.S. government computers were the target of "intrusions that appear to have originated" in China, although they were not confirmed to be from the Chinese military.

CNN requested a comment about the accusation from the Chinese Embassy in Washington. An embassy spokesman denied the allegations to the Wall Street Journal.

The Air Force, the main program manager of the Joint Strike Fighter program, has a number of ongoing investigations into the multiple hackings, officials said.

The officials said that a number of safeguards have since been put into place to protect that system.