MIAMI, Florida (CNN) -- A Florida boy remains in stable condition just days after he found his parents' long-forgotten handgun in a closet and accidentally shot himself in the head. 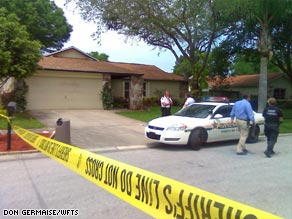 Police are deciding whether or not to charge parents after their son found a forgotten gun and shot himself.

Sheriff's detectives in Pinellas County, Florida, near St. Petersburg, say the boy found the .25-caliber European semi-automatic handgun in a box in a closet in their home.

"They are dealing with this very tragic situation, and at this point, no charges have been filed," said Cecilia Barreda of the Pinellas County sheriff's office.

His stepfather found Jacob Larson, 12, with a gunshot wound to the head Friday. The stepfather called 911.

Police say the shooting took place between 7:40 a.m., when his mother, Tracy Newman, leaves for work, and about 11 a.m., when his stepfather, Joseph Newton, returns home. The boy normally goes to school about 8:30 a.m.

"A few years ago, they moved, and [the gun] was stored in the closet. The mother never checked it, never fired it," Barreda said.

"They told detectives that they forgot they had stored it in a box inside a closet. Both her and her husband forgot about it," she said.

Newman told detectives that she received the gun six years ago from a former employer. Police say that both she and her husband are cooperating in the investigation into the incident.

The sheriff's office says it's unlikely that they will face charges.

Florida law prohibits a person from leaving a loaded firearm where a minor might have access to it. Prosecutors do have some discretion, and depending on what happens with the gun, charges ranging from a misdemeanor to a felony can be filed in the event of death or serious injury.

The Centers for Disease Control and Prevention say that 17 states have child firearm access protection and safe-storage laws.

Chief Assistant State Attorney Bruce Bartlett says that although laws are needed, an accident with a firearm can be a greater penalty than any judge could ever hand down.

"Sometimes, the injury of a child is more severe from a punishment standpoint than any kind of criminal charge," he said.

The CDC says one child, on average, every three days died in accidental incidents in the United States from 2000 to 2005, the last year data are available.

Bartlett said his office has filed charges in previous cases when there was culpable negligence on the part of a gun owner. But, he says, there are cases where accidents happen, not crimes.

The Brady Campaign to Prevent Gun Violence says that 34 percent of children in the United States live in homes with at least one firearm, so people have to be aware.

"It's a horrible thing, and those parents will blame themselves from here out, and you have to look at things real close to see if it warrants any enforcement from our end," Bartlett said.