One aboard in 'not survivable' Florida crash, official says

MIAMI, Florida (CNN) -- A Fort Lauderdale official said that only one person was on a plane that slammed into a vacant house Friday, a crash called "not survivable" by a fire official. 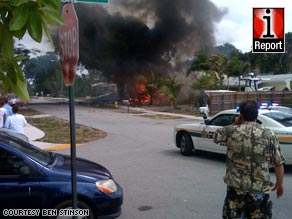 Bystanders watch the flames after the plane crash Friday in Fort Lauderdale, Florida.

The twin-engine Cessna crashed about 11:15 a.m. in a neighborhood not far from Fort Lauderdale Executive Airport, from which it took off, the city official said.

Video from the scene showed a small house virtually cut in two as firefighters poured water on smoking debris.

Chaz Adams -- spokesman for the city of Fort Lauderdale, which owns the airport -- said that there was only one person aboard and that a previous report of four passengers was incorrect.

The Federal Aviation Administration also said the flight plan listed one person on board, and witnesses at the airport have told the FAA that only one person boarded the aircraft.

Adams said three people live in the house that was hit, but "the house was vacant when the plane down."

He said the plane was headed to Fernandina Beach, north of Jacksonville, Florida. Seconds after takeoff, the pilot reported trouble.

"The tower cleared it to come back and try to land at Fort Lauderdale Executive Airport. The plane crashed attempting to return to the airport," Adams said.

Watch an iReporter describe the crash »

Donald Widing, chief of fire rescue for Oakland Park, said, "the crash was not survivable."

"The fire is under control. The emergency is contained," he said a little more than an hour after the crash. "What we're doing now is making sure that the scene is safe enough to introduce our first responders to do a complete primary and secondary search of the aircraft wreckage itself and the occupancy."

He added, "we are concerned with the plane's fuel tanks and have to save the house and the scene before we can conduct any further search-and-rescue operations."

Asked whether more than one home in the area was impacted, Widing said, "we're still assessing the damage."

He said "the majority of the fire" was "contained on the property that was affected." However, he said, there may be minor fire damage and some heat damage elsewhere.

Nation Transportation Safety Board officials were going to the scene.

All About Fort Lauderdale