OXON HILL, Maryland (CNN) -- Crew members of the Maersk Alabama, safely back in the United States after being attacked by pirates last week off Somalia, recounted their ordeal Thursday. 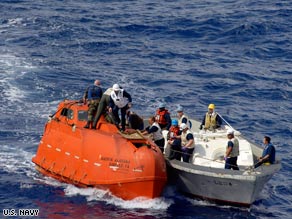 "They start firing before they climb, with AK-47," crew member Zahid Reza said.

"I was scared for my life. I was almost close to that. And they tried to shoot me many times," he said, pointing to his head. "Pointing gun all over. Here, there, in the back."

Pirates tried three times to board the U.S.-flagged cargo ship before their fourth attempt was successful, fellow crew member William Rios said, adding that the groups of pirates were different but that he thinks they were working together.

Rios said he was working on deck when he was called back to lock down the ship. Then, he said, there were gunshots, and an alarm went off to alert all crew members to wake up and get on deck.

"We went to our training," he said, declining to provide details: "If I tell you all what we did, pirates, they would know."

Watch the crew praise their captain »

The pirates intended to ask for a $3 million ransom, Reza said.

He said he and the ship's chief engineer took one of the pirates hostage. Reza said he persuaded the pirate -- whom he described as a young man, maybe 18 or 19 -- to trust him, pointing out that he is Bangladeshi and the pirate was Somali.

He told Abdul he would take him to the engine room to find more crew members. When they got there, the room was dark, he said, and he didn't know the ship's chief engineer was in there.

Watch Reza talk about wanting to kill the pirate »

"He was fighting me and chief engineer, to get away from us. A lot of yelling, shouting and screaming."

Rios said he went to the lifeboat, where Capt. Richard Phillips was being held, to exchange Abdul for Phillips but was unsuccessful.

The captain -- who offered himself as a hostage in exchange for the freedom of his crew -- was rescued by U.S. Navy SEALs on Sunday. The SEALs, on the nearby guided-missile destroyer USS Bainbridge, fatally shot three pirates and rescued Phillips. A fourth pirate was arrested.

He said he was proud of the Navy.

Phillips arrived in Mombasa, Kenya, aboard the Bainbridge on Thursday. The crew arrived at Andrews Air Force Base in Maryland overnight.

Another crew member, John White, said they were "damn lucky to be alive."

Rios called for more security in the Gulf of Aden.

"Put more military to patrol the waterway for us transporting material back and forth," he said. "... All the countries got to get involved with this."

"I think government should get involved," he said. "They should think about our safety, yes. ... This piracy is getting bigger and bigger."