(CNN) -- Roughly 70,000 beads said to provide clues to the social structure and wealth of people from the 17th century Spanish empire have been excavated by a team of scientists, an archaeologist said Tuesday. 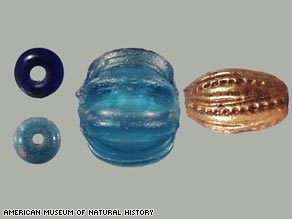 Of the 70,000 beads found over the decades, a few were in the walls of a church that had fallen.

Since 1974, scientists at the American Museum of Natural History have been digging beneath the Santa Catalina de Guale Mission, a remote outpost of the Spanish empire on St. Catherines Island off the coast of Georgia and "the largest repository ever from Spanish Florida," museum spokeswoman Kristin Phillips said.

"The mission was a major source of grain for Spanish Florida and a provincial capital until 1680, when the mission was abandoned after a British attack," Phillips added.

The study is a small part of a larger effort to uncover the history of the mission.

Thus far, the study has revealed "evidence of ancient trade routes from China via Manila's galleons to Mexico and Spain," said Lorann Pendleton, director of archaeology.

She said the indigenous people were wealthy in part because of their bead trade.

"The one that is most beautiful we think came from Spain," Pendleton said. "It is completely hollow and fragile, and the fact that it survived this long is extraordinary."

Of the 70,000 beads found over the decades, a few were in the walls of a church that had fallen, Pendleton said.

According to Phillips, most of the 130 types of beads found from the latter half of the 17th century are likely to be rosaries and medallions intentionally buried with the dead.

"Some of the highest status individuals were children," an observation determined by the number of beads one was buried with, Pendleton said. "This gives us lots of information about Guale society and means that status was ascribed with birth."

But there are some uncertainties with what the study uncovers about society.

"It's hard to say whether the presence of the beads reflects native or church hierarchies, the presence of wealthy individuals or something else entirely," said Elliot Blair, a graduate student from the University of California-Berkeley's Department of Anthropology, who is working with Pendleton and her team.

To remove some ambiguity, the crew of scientists will soon begin an X-ray fluorescent study to determine the chemical elements in the beads, Pendleton said, adding that each bead's elements will help determine its age range and pattern of burial.

All About American Museum of Natural History