MIAMI, Florida (CNN) -- Florida Law enforcement officials said Monday they had launched an investigation into a tragic boating accident near St. Augustine, Florida, that took the lives of five people and seriously injured seven others. 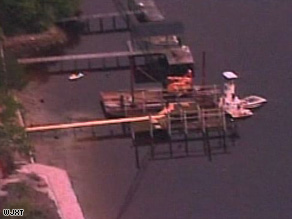 CNN affiliate WJXT shows the scene of the deadly boating accident near Jacksonville, Florida, on Sunday.

The Florida Fish and Wildlife Conservation Commission has taken over as the lead agency involved in the investigation.

The incident took place on Sunday around 7:15 p.m., in the intracoastal waterway in St. Johns County, Florida, about 20 miles north of St. Augustine.

According to FWC investigators, a 22-foot boat with 12 people on board rammed into the rear and right side of a 25-foot tugboat.

"We are still investigating and haven't come to any conclusions yet," said Carol Pratt, spokeswoman for FWC. She said they still do not know who was driving the boat. They also are waiting for victims' next of kin to be notified before releasing any of their names and ages.

The tugboat was at a dock and boat launch under construction on the Intracoastal Waterway in Palm Valley, said Jeremy Robshaw, a spokesman for St. Johns County Fire and Rescue.

Robshaw said rescuers couldn't initially reach the end of the unfinished dock, but laid plywood sheets on the structure to get to crash victims.

No one was onboard the tugboat, which is registered to F&A Enterprises in St. Augustine.

The seven injured were taken to Shands Jacksonville Hospital in Jacksonville, Florida. Two patients remain in critical condition, one is considered serious and three are in fair condition. A hospital spokesman did not have information on the seventh victim.

FWC told CNN that they hope to release more information on the incident and on their investigation.

As in any accident, toxicology studies will be done on the driver of the boat, to determine whether he or she was impaired, spokesman Carol Pratt told CNN.

All About Jacksonville (Florida)