For wounded soldier, citizenship is 'icing on the cake'

WASHINGTON (CNN) -- Sgt. Juan Luis Alcivar raised his right hand and pledged allegiance to the Constitution, swearing to protect it against all enemies, foreign and domestic. 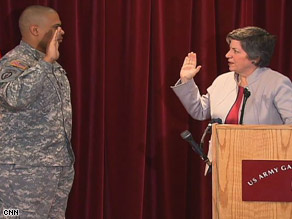 It was a promise already fulfilled.

As evidence, there was Alcivar's camouflage uniform and the limp that accompanied him as he walked across the stage.

Alcivar, 25, was sworn in as a United States citizen on Friday, some 20 years after coming to the United States, four years after joining the Army, and months after a sniper outside Baghdad, Iraq, shot him in the leg.

At a ceremony at Walter Reed Army Medical Center in Washington, Alcivar appeared reserved and soldierly as he took the oath, but he later told reporters he was overjoyed.

"When I was taking the oath, it was like a surreal moment," Alcivar said. "I was like, 'Wow, I'm actually becoming a citizen.' It was great. I'm so happy, I'm speechless. I really can't say anymore. I'm just happy to be an American."

Watch Alcivar describe why becoming a citizen was important »

The ceremony marked the first time Secretary of Homeland Security Janet Napolitano has administered the Oath of Allegiance.

At any given time, roughly 40,000 noncitizens serve in the U.S. armed forces, according to immigration officials. While Congress feuds over many immigration issues, it has been easing the path to citizenship for lawful noncitizens who are serving in the military. The government has naturalized 46,465 servicemembers since September 2001, according to U.S. Citizenship and Immigration Services.

Many are naturalized in ceremonies overseas or onboard Navy ships at sea, USCIS said. The government also has granted posthumous citizenship to 118 members of the U.S. armed forces since August 2002.

Alcivar said he joined the military because he loved the country, not because he saw it as a path to citizenship. He was born in the Dominican Republic and has lived in the United States since he was 5. Alcivar said he always considered himself an American.

Indeed, Alcivar originally pursued citizenship at least partially so he could stay in the military. A rule limiting noncitizens to 8 years in the military has since been relaxed, he said.

The United States was already at war when Alcivar joined.

"I knew what I was getting into," he said.

"I did it [signed up] because of my country, because I love my country. I've been here for 20 years. I love being here. And you know this [citizenship] is just like icing on the cake, basically."

"If I had went out there and died for my country, that wouldn't have mattered, because to me, I feel like an American. Like my buddy says, 'Even though you didn't have your citizenship, you were an American to me, because you went out there and served with us and you fought with us and you got shot for us.' And they thanked me for that, and I thanked them for letting me stay here."

Because of Alcivar's injuries, the femur in his right leg has been replaced by a metal rod. Alcivar received the Purple Heart and is under the care of the Warrior Transition Brigade at Walter Reed, a unit aimed at overseeing patients' health, welfare and morale.

"If you gave me the option to do it all over again, knowing that this was going to happen to me, I would still do it," Alcivar told reporters.

Alcivar said he hopes to continue his career in the military.