NEW YORK (CNN) -- For the first time since September 11, 2001, the rich chords of a chapel organ damaged in the terrorist attacks echoed through New York City's historic St. Paul's Chapel. 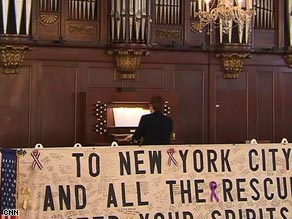 In the months following the attacks, the chapel became a makeshift bunker for recovery and relief workers. Working round the clock, hundreds of volunteers transformed St. Paul's into a place for rest, meals, prayer and counseling for city firefighters, police and construction workers clearing the rubble just blocks away at Ground Zero.

When St. Paul's Chapel reopened to the public on August 25, 2002, the organ was clogged with debris and could not be played.

"When a pipe sounds we say that it 'speaks.' And if it doesn't 'speak' clearly, then the sound isn't as interesting and colorful," Haskel told CNN Friday morning. With its airways clear, "This one is exactly right," she said.

Haskel rehearsed two pieces: "God's Paschal Lamb is Sacrificed for Us" and "Good Christians All Rejoice and Sing."

Watch and listen to the rehearsal »

Built in stages between 1764 and 1796, the chapel is Manhattan's oldest continuously used public building. Designed in Georgian Classic-Revival style, it boasts handmade woodwork, carvings, and door hinges as well as 14 Waterford chandeliers installed in 1802.

The chapel's original organ was built in London. In the years since, a number of instruments have called St. Paul's Chapel home. The 1,680-pipe instrument currently housed within the chapel's elaborate original 200-year-old mahogony case was built in 1964 by of Schlicker Organ Co. of Buffalo, New York.

The chapel now serves as host to a series of 9/11 memorial exhibits. As Haskel played Friday morning, tourists from around the world browsed the displays.

A man from the Bronx who assisted the New York Fire Department in the months after the attacks remembered a time when the chapel "closed its door to souls and opened it to bodies" and the organ fell silent under the clamor of refuge-seeking firemen, police officers and other workers. He said he was attending Friday morning's rehearsal to hear the organ played for the first time.

"The organ was not usable then," Haskel said of the months following the 9/11 attacks. "For me, in being able to be here -- and meeting people who were here during 9/11 -- to be able to play organ music that should be happening in this room is a great honor," she said.