BUZZARDS BAY, Massachusetts (CNN) -- A crew member aboard a freighter seized by pirates off east Africa said Wednesday that the crew had captured one of four pirates who hijacked their vessel, but they released him in a failed hostage trade. 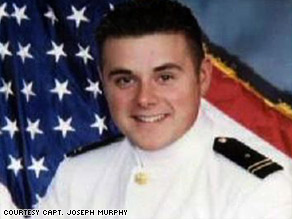 Shane Murphy is one of the crew members on board the U.S. ship that was hijacked off Somalia's coast.

The crew of the U.S.-flagged Maersk Alabama had hoped their release of the pirate would lead the pirates to release Capt. Richard Phillips, but it did not, crew member Ken Quinn told CNN in a satellite telephone call.

Instead, the four pirates -- who had scuttled their boat when they boarded the ship armed with AK-47s -- took Phillips with them aboard the ship's 28-foot lifeboat, Quinn said.

The crew had earlier overpowered the pirates and forced them off the ship, according to messages from first officer Shane Murphy.

Murphy relayed the information in quick phone calls to his wife and father in his home state of Massachusetts -- where his father, Joe Murphy, is a maritime instructor, and his son once lectured about dealing with hostage situations.

Joe Murphy, who teaches at the Massachusetts Maritime Academy, said the crew sent a distress signal to which the U.S. Navy responded immediately from almost 200 miles away.

The ship had eluded the pirates for more than three hours off the coast of Somalia before being boarded, Joe Murphy said his son reported.

After hiding from their attackers, then leading them to believe they were more in command of the situation than they really were, the crew jumped the pirates, capturing one of them, the elder Murphy said his son told him.

"It was by sheer force," he said. "They have no weapons -- it must have been, obviously, that they overpowered them."

He said three other pirates "had gone into the water."

Pentagon officials confirmed that four hijackers had boarded the Maersk Alabama Wednesday morning, and that one had been in custody.

Joe Murphy said his son was in contact with the pirates Wednesday evening, helping negotiate for the release of the captain.

He said he can only shake his head at the timing of the attack.

Two weeks ago, Shane Murphy visited his father's class to lecture the students on situations like the one he now faces.

"This is a classic example of Murphy's law," Joe Murphy said. "I teach the course, my son goes to sea and he gets captured."

He said that, despite his concerns, he has faith that his son's experience and knowledge will help wrap up the tense situation.

"Hopefully, it's all going to work out," he said. "I think this is going to end as a very positive story."

CNN's Jason Carroll and Tom Watkins contributed to this report.

All About The Pentagon • Pirates