(CNN) -- The chase began with a stolen plane from a Canadian flight school, meandered through three states with U.S. fighter jets hot on the trail and forced the evacuation of the state Capitol in Wisconsin. 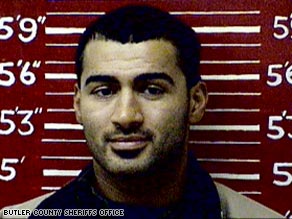 Yavuz Berke is being held in the U.S. after allegedly stealing a plane from a Canadian flight school.

It ended about seven hours later in a Midwestern town of 360 people inside a general store off a narrow dirt road -- with the suspect sipping on a Gatorade, waiting to be cuffed.

"He just came in, got a Gatorade, tried to get a beef jerky, didn't have enough money, went over and sat down and just kind of watched people come and go," said Tammy Bailey of Simmons Grocery & Hardware in Ellsinore in southern Missouri.

Authorities said there, they caught up with the man -- identified by U.S. immigration officials as Yavuz Berke, also known as Adam Dylan Leon -- after his 783-mile journey in the stolen Cessna 172 aircraft Monday.

Berke, who authorities said is a Turkish-born Canadian citizen, was in the custody of U.S. immigration officials Tuesday on suspicion of illegally entering the United States, according to the U.S. Immigration and Customs Enforcement agency.

The plane was reported taken from a flight school in Thunder Bay, Ontario, about 3 p.m. Monday by a pilot identified as a student at the school, said Laura Brown of the Federal Aviation Administration.

It flew over Lake Superior less than half an hour later.

At one point, the pilot appeared to acknowledge that he saw the other planes, said Mike Kucharek, a spokesman with the North American Aerospace Defense Command.

But the man did not communicate with either NORAD or with the FAA, officials said.

Instead, the plane flew "erratically" during the afternoon, Kucharek said, sometimes reaching 14,000 feet in altitude, then dropping as low as 3,000 feet.

"We don't want to suppose the motive of the individual," Kucharek said. "But it certainly made a day for the professional pilots that were flying these missions and a very serious situation from a NORAD perspective."

During the pursuit, Wisconsin evacuated the Capitol in Madison for less than an hour as a precaution.

The Wisconsin National Guard deployed two F-16s to try to get the pilot to communicate with FAA air traffic controllers.

Eventually, the man landed the four-seater plane on a road in southern Missouri, parking it under what appeared to be a bridge or culvert -- apparently to hide it, a federal law enforcement source said.

The plane -- which had been fully fueled, giving it about seven hours of flying time -- was down to roughly 30 minutes of fuel, said Lt. Cmdr. Gary Ross of NORAD.

The pilot ran from the scene, prompting a brief manhunt.

The search led authorities to Simmons Grocery & Hardware, where they found their suspect.

"They walked over and asked him a few questions," said Bailey, the store employee. "The guy stood up, turned around. They handcuffed him, stood there, talked to him a little bit and took him off."

All About Federal Aviation Administration • Missouri