(CNN) -- Authorities in South Dakota and Nebraska on Friday suspended a search for a missing Nebraska family after a relative told authorities he spoke to his kin and said they are doing well. 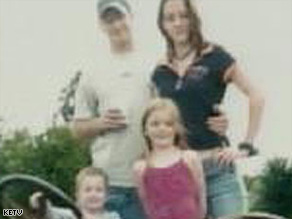 The Schade family of Creighton, Nebraska, is not missing, a relative says.

Law officers still don't exactly know the location of Matthew Schade of Creighton, Nebraska; his wife Rowena, and their two children -- a daughter, 11, and a son, 8.

But authorities think they might be in Nebraska because officials received a tip that a brush truck they suspect the couple stole from a volunteer fire department in South Dakota has been found abandoned in Antelope County, Nebraska. A brush truck is a type of small fire truck.

The family was last seen on March 20 in Knox County, where Creighton is located. Knox Sheriff James Janecek said the family had gone missing after an officer went to their house on a domestic abuse complaint.

Matthew Schade had been on probation for burglary and is wanted for violation of probation and failure to report a change of address, Antelope County Attorney Michael Long told CNN.

Schade's father, Chet Schade, contacted the Knox sheriff's office on Thursday afternoon. He confirmed he had spoken with all four family members and said they were alive and well.

The Knox County sheriff's office is urging the couple "to contact authorities immediately to resolve the situation."

"They could only help themselves by giving us a call," Janecek said.

Searchers had been searching for the family in South Dakota's Black Hills until it was determined the couple possibly made their way back to Nebraska.

"The investigation clearly shows the Schade family is no longer in the Black Hills area," said the sheriff's office in Pennington County, South Dakota.

Investigators think the Schades might have gone camping on U.S. Forest Service property in the Black Hills. Schade had visited the area in the past, and law officers found the family's Ford Taurus on Tuesday in Silver City, South Dakota.

CNN's Kara Devlin and Joe Sterling contributed to this report.

All About Missing Persons • Nebraska