A nod and a link: April Fools' Day pranks abound in the news

(CNN) -- If you happen to browse upon a news story that's too odd to be true Wednesday, hold your outrage and check the calendar. 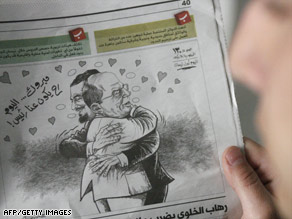 It's April Fools' Day -- when media outlets around the world take a break from the serious business of delivering news and play fast and furious with the facts.

No one quite knows when the practice began, but any journalist will point to what is undoubtedly the biggest hoax that any reputable news establishment ever pulled: A 1957 BBC report that said, thanks to a mild winter and the elimination of the spaghetti weevil, Swiss farmers were enjoying a bumper spaghetti crop.

The segment was accompanied by pictures of farmers pulling strands of spaghetti from trees -- and prompted hundreds of viewers to call in, wanting to know how they could grow their own spaghetti trees.

While not as elaborate, the pranks that media outlets harvested this year have been quite rich:

The Guardian in London ran a story Wednesday announcing that, after 188 years as a print publication, it will become the first newspaper to deliver news exclusively via Twitter.

Twitter, a micro-blogging site, allows users to post updates that are 140 characters long. In keeping with the limitation, the newspaper said it had undertaken a mammoth project to retool the newspaper's entire archive.

The news isn't always black and white. The Taipei Times, one of three English-language dailies in Taiwan, fooled many readers with a report that two pandas donated by China to the Taipei Zoo were, in fact, brown forest bears dyed black and white.

To render a whiff of authenticity to the story, editors made a reference to China's tainted-milk scandal that sickened 300,000 people last year.

But the story contained enough outrageous lines to clue in readers.

Sometimes, of course, the pranks backfire. In Australia, the Herald Sun newspaper drew hundreds of angry comments Wednesday after a story on its Web site said a Chinese construction firm wanted to buy naming rights to the iconic Melbourne Cricket Ground.

Many readers did not realize the story was a hoax -- despite a quote from a spokeswoman named April Fulton. iReport.com: Share your best April Fools' office pranks and jokes

Geoffrey Davies, the head of the journalism department at London's University of Westminster, said such pranks do not particularly affect the credibility of a news organization.

"They are done in a way that you know it's a joke," he said. "In the Guardian story, for example, the clue is in the name of the journalist [Rio Palof] -- which is an anagram for April Fool. People look out for them really, and therefore, you kind of open the paper trying to spot the spoof story."

Of course, news outlets aren't the only ones who hoodwink readers on April 1.

The town of Rotorua, a popular tourist stop in New Zealand, said a rotten egg smell that permeates the town is such an aphrodisiac that Playboy founder Hugh Hefner wants to build a mansion there.

Microsoft Corp. said it is releasing a new Xbox 360 video game, "Alpine Legend," which will do for fans of yodeling what "Guitar Hero" did for rock music. And car manufacturer BMW announced in ads in British newspapers that it had developed "Magnetic Tow Technology."

"BMW Magnetic Tow Technology is an ingenious new system that locks on to the car in front via an enhanced magnetic beam," the ad said. "Once your BMW is attached you are free to release your foot from the accelerator and turn off your engine."

Steve Price, features editor of the Taipei Times, said such hoaxes are not only good for a laugh but serve a purpose.

"It highlights an important aspect of media that readers and viewers should keep a critical mind when they read stories or watch TV," he said. "I think that is especially true with the advent of the Internet and the proliferation of blogging."

The origins of pulling pranks on April Fools' Day is unclear. Some believe it dates back to the time when the Gregorian calendar was first adopted, changing the beginning of the year to January 1 from April 1. Those who still held on to the Julian calendar were referred to as "April Fools."

Traditionally, the pranks are pulled before noon on this day. But a wildly successful prank this year was conceived and executed much earlier.

Millions of Web users fell for a video that claimed to be the first flying five-star hotel in a converted Soviet-era helicopter.

The 37-second clip, which was posted online Thursday, was an elaborate computer-generated hoax by the airport hotel chain Yotel.

If you were one of the many who fell for the prank, hold your disappointment.

You can still reserve rooms on the moon through Hotels.com or book flights to Mars through Expedia.com for $99.

But hurry. The offers end Wednesday.