Ford exec: No thanks, Uncle Sam

(CNN) -- Ford is the only major U.S. carmaker that is getting by without U.S. taxpayer money. 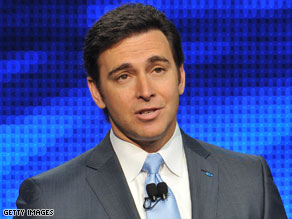 Mark Fields of Ford says consumer confidence is key to getting the auto industry back on track.

GM and Chrysler, on the other hand, have been told the Obama administration they will receive operating funds for several weeks in return for undergoing significant restructuring.

Mark Fields, executive vice president of Ford, spoke to CNN's Kiran Chetry Tuesday on "American Morning" about the company's plans and whether it will be able to continue without financial aid from the government.

Kiran Chetry: So, Mark, your company is the one that's gotten by without federal money. Will you be able to continue that?

Mark Fields: Well, our position hasn't changed. We're in a different position than some of our competitors, and we're not seeking emergency taxpayer assistance.

Chetry: Right, but I'm saying in the future, how are you guys guaranteeing that you won't need to go to the federal government like your two competitors have and ask for some help?

Fields: Well, we're going to continue executing our plan, which really involves decisive actions around transforming the business, but also bringing great high-quality, fuel-efficient vehicles into the marketplace. And we've been working this plan over the last three years, and we've been making progress.

Clearly it's a tough time in the economy, but we are really focused on bringing these great cars and trucks to customers, getting our cost structure right. We've come to new agreements with our UAW partners. We're working through reducing our debt. So we're going to continue working through that, and we don't expect to take taxpayer assistance from the emergency funds.

Chetry: You say it's been tough times, and certainly for you guys, it has -- 2008 the worst annual loss in Ford's 105-year history. You guys can restructure. You can work out new deals with the unions. But in the end, if people aren't buying cars or they can't get credit, how do you remain viable?

Fields: Well, consumer confidence is the biggest issue in the marketplace right now. The good news is, our new cars and trucks that are coming into the marketplace are being well-received. Our retail market share has been up three of the last four months. We expect the month of March our retail share to be up again.

But getting that consumer confidence is really important. And that's why today we're announcing our Ford advantage plan, and it's for any customer who buys a Ford, Lincoln or Mercury product, when they come into the showroom and buy their product, if that customer loses their position, we will pay their car payments up to 12 months while they're unemployed, to give them that peace of mind.

Chetry: You're also offering some zero percent financing. I'm sure that you're trying to do that as well because of the frozen credit in a lot of instances. I want to get your take on this, though.

President Obama announced yesterday he's giving ... Chrysler a month, basically, to submit a reorganization plan that the administration finds acceptable. The Obama administration also of course forced General Motors CEO Rick Wagoner out. Was that the right move, in your opinion?

Fields: Well, what we are supportive of is that the president is committed to a vibrant U.S. auto industry. As we mentioned, Ford is in a different position. We're not asking for the emergency taxpayer assistance. But what we are focusing on is taking decisive action to streamline our business, but more importantly win new customers with the great set of products we're going -- we're coming out with over the next couple of months.

Chetry: You know, there is some unprecedented government intervention going on right now in the U.S. auto industry at your competitors. They're getting billions of dollars in taxpayer money. They're being forced to restructure, as we talked about. They actually were forced to fire their CEO. And right now, it seems that, you know, they're on a different level than you guys are. Is there some sense that perhaps there's an unfair advantage, that they're getting a lot of government help, whereas you guys are sort of on your own. Does that concern you?

Fields: Well, we don't feel we're being disadvantaged, because we have been restructuring our company over the past three years. We have been investing in high-quality, fuel-efficient vehicles over the last couple of years, which are just starting to come to the marketplace. So our approach is continue to work this plan, continue to make sure that Ford remains competitive both today and in the future and continue to work with our stakeholders to make sure that happens.