(CNN) -- The body of a fugitive U.S. marshal has been found in the city of Juarez, Mexico, according to the U.S. Marshals Service -- the latest discovery in a wave of violence that has gripped towns along the U.S.-Mexican border in recent months. 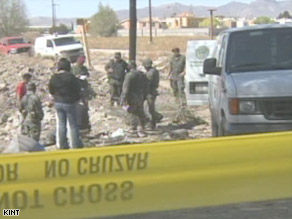 The body of Deputy Marshal Vincent Bustamante was found Wednesday in Juarez, Mexico.

The body of Deputy Marshal Vincent Bustamante -- who faced federal charges of stealing weapons and other government property -- was found in Juarez on Wednesday, said Marshals Service spokesman Jeff Carter.

Bustamante appeared to have been shot in the back of the head, a federal law enforcement source said.

Chihuahua state police said the body had multiple wounds to the head -- apparently consistent with an execution-style shooting, according to Edgar Roman, a reporter with XHIJ television in Juarez.

Watch where the U.S. Marshal's body was found »

Bustamante, 48, was charged with stealing U.S. government property including Glock and Ruger handguns, a shotgun and a pair of binoculars, according to court documents.

According to the federal source, who was not authorized to speak about details of the case and asked not to be named, a pawnshop owner became suspicious when Bustamante attempted to pawn a shotgun and called the U.S. Bureau of Alcohol, Tobacco, Firearms and Explosives.

The source said Bustamante would buy back items he had pawned on his pay days and return them.

Bustamante's attorney, Mike Torres, said a warrant was issued for Bustamante's arrest after he failed to appear at a court hearing last week.

He said Bustamante was a 17-year veteran of the marshals and a former El Paso Police officer who lived in El Paso with his wife and two children.

"He was a familiar face around the federal courthouse here," Torres said. "I'm very shocked by this and very saddened.

"He had a lot of friends and a lot of people that cared about him."

Carter said Bustamante was on administrative leave from the marshals and had been required to turn in his gun and badge.

He said Bustamante had not been in Mexico on marshals business and that all of the weapons he was charged with stealing had been recovered.

Carter said Bustamante was on "modified status" with the marshals, meaning he had been required to turn in his gun and badge outside of his official work hours.

"What I can tell you is that the U.S. Marshals Service is saddened by the death of Deputy Bustamante and our thoughts and prayers are with his family," he said.

Carter said U.S. marshals are working with the FBI and Mexican authorities to investigate the death. He said an autopsy will be conducted in Mexico, and another may be conducted once Bustamante's body is returned to the United States.

Juarez, which sits across the border from El Paso, Texas, has become one of the major battlegrounds as drug cartels fight both each other and Mexican authorities. The conflict has made violence increasingly common in Juarez, Tijuana and other Mexican border towns.

More than 400 deaths in the region have been attributed to the fighting this year.

All About U.S. Marshals Service • Mexico