An SUV is home for jobless duo 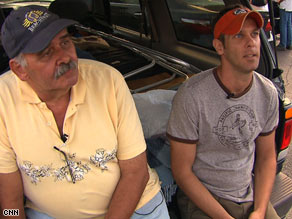 Richard Barboza, left, and John Nilsen are among those struggling in the current economic recession.

It's just after sun-up. The streaks of light shimmer off the car windows. In the back of the Ford Explorer John Nilsen stirs. This is home. Clothes are kept in a suitcase. Food is wherever they can find it.

"It's definitely not something that you ever see yourself being, homeless," Nilsen says.

But homeless they have been for the past six weeks, ever since the money ran out and they were evicted from the Fort Lauderdale, Florida, apartment they shared. Nilsen had lost his job, and Barboza is waiting for disability checks to start arriving.

The line of homeless men and women has already started to form at the food bank when the two men walk up. The faces are always the same, with a few more added every day.

Michael is a regular. He makes grasshoppers out of palm fronds, then sells them when he can for whatever he can get.

James says he once played professional football for the Miami Dolphins. No one believes him.

Nilsen and Barboza wait quietly for their turn to get in the front door. "There's a lot of emotional and mental turmoil when you're in a situation like this," Nilsen says.

Breakfast at the Cooperative Feeding Program is rushed. There are so many to feed. Seats at the tables are a premium. Nilsen and Barboza eat quickly their meal of sausage patties, an orange wedge, some cake and coffee. They want to get moving.

It's back in the car and off to the County Library. They can charge their cell phone there and use the public computers for an hour. Nilsen checks Facebook to see how his friends are doing That's how he stays in touch. The two men then begin searching for places to rent on Florida's West Coast.

"Big old double-wide trailer," Nilsen snickers. A two-bedroom catches their eyes. "I like the location," whispers Nilsen, "It's just north of Tarpon Springs."

If they can get enough money together, Barboza says they'd like to get out of Fort Lauderdale. "After having spent 20 years here I'm due for a change anyway."

In the afternoons, the two men try making a few bucks. Nilsen got $25 for participating in a food tasting. Barboza has an opportunity to be in a focus group that will pay him $75.

Nilsen had been donating plasma twice a week, but now that he's homeless they can't use him anymore. Barboza made about $20 by panhandling on an Interstate 95 exit ramp for about an hour. He stopped after some other homeless men threatened to kill him for working their turf, he says.

It's not easy finding work when your address is a license plate number. For Nilsen and Barboza, it's doubly difficult. Both men have disabilities. Barboza was injured in a car wreck. Nilsen had a blood clot in his right leg when he was 16. He walks with a limp and uses a cane.

"When we pull ourselves out of this," Nilsen says, "it's gonna be something you can look back on and draw from and say, 'You know what, if I was able to get through that ...' "

"He's got his strengths and weaknesses," adds Barboza, "and I've got mine. We balance each other out."

By the time five o'clock rolls around, the two are getting hungry. There was no lunch today. A nearby church is serving dinner. It's time to stand in another line. They know most of the people here from breakfast at the Cooperative. Many are longtime homeless.

"If they know better than I do how to survive, then let me ask and let me get the knowledge I need to survive for however long it's gonna be," Nilsen says.

Outside the church a van pulls up The homeless are handed bags of toiletries. You take what you can get because you don't know how long it's gonna be before you get more, Nilsen says.

A sliver of a moon shines now. "The toughest part of the day for us," Barboza says, "is once it gets dark until we go to the place where we sleep at night."

For the next few hours the two men drive the neon sign-lit Fort Lauderdale streets. There are very few places, they say, where they can stop and park without police chasing them off. Once in a while they pull into a local park for a couple hours until the lights on the fields are turned off and the gates closed. At least here, they're not wasting gas.

Every night is a challenge making it until 11 p.m., they say, when they can finally drive to their secret spot and bed down in the back of the old SUV.

All About Homelessness • Florida